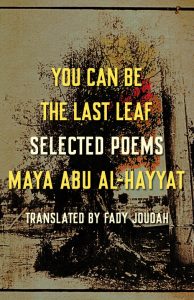 You Can Be the Last Leaf is the English-language debut of Palestinian poet Maya Abu Al-Hayyat, translated from Arabic by the acclaimed Palestinian-American poet and translator Fady Joudah. Joudah is the author of five collections of poems, most recently Tethered to Stars (Milkweed Editions, 2021), and has translated several poetry collections into Arabic.

Maya Abu Al-Hayyat, who lives in Jerusalem, runs the Palestine Writing Workshop in the city of Ramallah, alongside Anas Abu Rahma and Yara Bamieh, the two other core staff behind the initiative. The Palestine Writing Workshop encourages reading in Palestinian communities through creative writing projects and storytelling. Among other things, it seeks to nurture and strengthen the literary writing and cultural scene in Palestine.

You Can Be the Last Leaf is a collection of selected poems from Abu Al-Hayyat’s four poetry collections, published in Arabic between 2006 and 2021. It gives the reader a window into the impressive journey that the poet has charted from her first poetry collection (What She Spoke of Him, 2006) to the latest (The Book of Fear, 2021). Through the window that You Can Be the Last Leaf offers, the readers witness life in Jerusalem and Ramallah alongside truths from the poet’s life. As Joudah observes in his foreword, “Abu Al-Hayyat is relentlessly direct in everything she speaks: when she patiently assembles her soul or when she leaps through it.” Abu Al-Hayyat is not just direct, but also witty in her work, her poetic voice beautifully embodying the different parts of her identity—and the identities that she encounters along the way.

The book’s title, in and of itself a hopeful statement, is taken from “You Can’t,” a poem composed of five simple sentences. As I read it, I thought of the countless artistic ways to assert resistance, especially in a place where one might often feel punished, instead of celebrated, for being different. The poem’s final sentence explains: “[y]ou can convince the universe / that you pose no threat / to the tree’s life.” One can recognize in this observation parallels between the poem and one’s own world, in thinking about instances that require bravery, persistence, and belief in one’s own truth.

I comprehended “You Can’t” more clearly after reading “I Suffer a Phobia Called Hope,” a poem in three parts. Here, the speaker recalls “the disappointments / that were committed in [hope’s] name.” Only those who are persistently hopeful would know what it means to suffer from this phobia; and how tiring it can be when hope does exist, but the reality is far from hopeful.

As I read the disappointments that the speaker mentions—“the children who don’t return,” “the memory that’s never senile”—I thought momentarily of other disappointments I am aware of, namely the still walled-off Bethlehem and my friends who live there, whom I miss terribly. Then we read the sentence: “all of them [the disappointments] hope crushed / beneath its wings as I smash / this mosquito on my daughter’s head.” The simple choice of words is a superb example of the wit in Abu Al-Hayyat’s work, conveying how both actions are instant. What does it mean that the crushing and smashing are instant? I revisited the poem numerous times but could not decide on one reading. It might mean that hope remains despite the disappointments; or it might relate to how both actions are as mundane as can be.

The poem then continues with two additional stanzas, replete with statements that feel like facts but actually voicing the subjective experience of loss and uncertainty: “[t]he grieving have only the unknown”; and later, “[p]ain has no logic.” Both statements lead the reader to the final stanza, carrying the wish “that no one goes / and no one comes” before the poem’s final sentence: “[a]ll going is a stroke of myth / and each return / a punctured lung.” The explanation for the wish leaves the reader speechless.

The thread of hope that weaves through “You Can’t” and “I Suffer a Phobia Called Hope,” from the first two sections of the collection, continues to the third section. Here, the struggle to find hope is detailed in “That Smile, That Heart.” The one-stanza poem is twenty-two lines long, linking into two long sentences. It tells the story of the little smiles and hearts that roam the world; a metaphor for children, and of what happens to the universe when they depart prematurely, “with eyes green with hope–”  Here, those smiles carry the hope in their eyes. But when they do go, then the universe suffers. This suffering, as the speaker explains, is because the departure of the little smiles is not justified—“not from caries / and not broken in a pickup / soccer game or from a dentist screwup.”

The fourth section, “A Contemporary Novel” is surprisingly refreshing, in that it is a poem discussing a novel, as opposed to having a novel discuss poetry. The poem is a smooth dance between the voice of the poem and the narrator of the story related within. The voice observes how, in the novel, “[f]inding out who the killer is / is not the point of the murder / in the opening scene.” The voice then details a conversation between the female protagonist of the novel and its narrators, ending with an address by the first to the second:

She addresses her grievance to the narrators:

“There’s no time on which

my body leans that does not fall.

I don’t have what pleases critics.

What remains is chatter.”

“A Contemporary Novel” moved me because it shares a similar image with “The Looming Wide Path,” another poem in the same section. In the first, “[m]y hand takes off the woman’s face / and hangs it by the door”. In the second, “I check my forehead, recall that I left / my face on the coat hanger before I left the house.” The absent face, first forgotten then remembered as still at home, on the coat hanger, suggests potential vulnerability; perhaps from the “looming wide path” or the “looming conceit” that the poem mentions. There is a difference in the two poems, though, in the way and place that the “face” is left, and whose face was left. The imagery above suggests power dynamics; this is also present in “A Contemporary Novel,” when the speaker states “[i]n her palms his mysterious chiseled form is inspired.” Fady Joudah’s translation coaxes out the fullness of the images evoked in both poems, and how they connect to one another.

This translation is necessary because Maya Abu Al-Hayyat is fierce, impressive, and unapologetically herself. Her work takes the reader on a rollercoaster of emotions anchored in truth. In her poems, the reader experiences life as it is, with its round and broken wholeness. Abu Al-Hayyat writes in a clear and concise fashion about loss, grief, fear, hope, and love echoing her experiences as well as what she witnesses in Palestine. By writing about these difficult and challenging topics in the context of life in Jerusalem and Ramallah, which others might avoid, Maya Abu Al-Hayyat has made it possible for us to engage with her personal and poetic journey through her poems in Arabic. And in his sensitive translation, Fady Joudah has given the English-language reader an equal chance for all the right reasons.