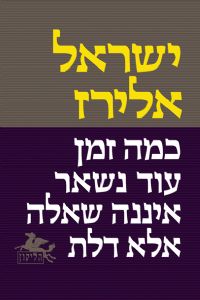 Israel Eliraz is a champion of the everyday. In his eyes, even the smallest and most menial tasks are heroic. He finds beauty in going home and turning on the lights, in raising a hand and calling someone over, in benches and fences and empty playgrounds. But he also notices the loneliness that is palpable when two people who share the same space start drifting apart, when the excitement and commitment that were once there begin to erode. That, too, is part of the everyday, and should also be recognized and handled with care. He examines both body and soul with patience, awareness and respect. He appreciates how enigmatic and fragile one’s relationship with oneself is, and more so one’s relationship with others. He studies love as it fades, and awaits the emergence of a new understanding.

Eliraz’s poetry deals with the prosaic from a philosophical perspective. He is interested in feeling the pulse of existence through the act of observing it closely, almost religiously. His writing is contemplative, even meditative. Everything about “being in the world” fascinates him. Time is important, the ebb and flow of the days passing by as well as the fleeting moment, a mere blink of an eye which is then gone forever. The elements and the objects are significant too: the sky and the clouds, a book, a table or a plate of bean soup. To him, language is both an element and an object, and he uses it mindfully, crafting his poems with a minimalist approach and a very specific vocabulary. He creates poetry which is extremely deep and complex precisely because it is modest in nature, nearly stripped down to the bare essentials. Yet, somehow, that very poetry also manages to mysteriously contain numerous cultural references to art and music, showcasing an impressive intellectual streak with no whiff of pompousness or turgidity. (Introduction by Liat Simon)

The following poems were originally published in Hebrew in How Much Time is Left is Not a Question but a Door by Israel Eliraz (Modan/Helicon, 2013), and have been translated into English by Liat Simon.

Someone writes on the fence:

which is a heroic line.

Someone raises a hand and calls

To the nameless dog they say

And there is solitude which I have nothing

to say about no more

than about bean soup.

come out of it

On the table there is a book that you

that you will not be closing,

and we did not take into account (when we said:

The playgrounds are already empty. Empty are the public

“The clouds have piled up again”.

A wave of I do not know what,

but I will, is rising within me.

Every day a day goes by that we go through, there

is not much else

So it will be with what

until the pain ceases and understanding

we shall stand in the corner of the classroom

showing our backs to the world

Two poems that use humor to revise the traditional narrative of Soviet Jews' triumphal arrival in Israel.

The surprising parallels in the lives and poetry of Natan Zach and Aharon Almog, and their place in Israeli literary history.

A selection of English translations of work by the poet Sarai Shavit.

A selection of English translations of work by the poet Yael Statman.

An Autobiography in Four Parts/Scroll Down for Original in Hebrew