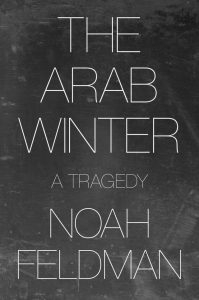 In this volume, the author takes issue with the notion that the “Arab Spring” (i.e. the series of uprisings, revolutions, counter-revolutions, and civil wars that swept a large part of the Arabic-speaking world between 2010 and 2018) was doomed to failure from the outset, and that it should be seen as a “mirage” or “false dawn.” Feldman accepts that the uprisings of this period may appear to have “made many peoples’ lives worse than they were before.” Nevertheless, he asserts that the Arab Spring was historically significant.

Feldman makes three major arguments in support of his view. Firstly, he suggests that the uprisings ushered in a new era in the Arab world, a sharp break with a period in which outside “empires”— Ottoman, European, and American—played the defining role in shaping the course of Arab politics. The Arab Spring was the first occasion in which Arabs took “collective action for self- determination that was not conceived primarily in relation to imperial power— neither as the main target of the collective movement nor as its fomenter or supporter.” Key actors in the Arab Spring, Feldman suggests, took charge of their politics through action, and in so doing, “remade and transformed the two big forces that have dominated political ideas in the Arabic- speaking world for the past century, namely Arab nationalism and political Islam.”

Regarding Arab nationalism, Feldman’s second major claim is that the Arab Spring demonstrated— contrary to the growing sense up until 2010 that a pan-Arab political space was no longer a meaningful reality—that such a space does exist. The Arab Spring affected Arab states, events in one country impacting on others, while leaving non-Arab Middle Eastern countries (Israel, Turkey, Iran) untouched. However, the author suggests, these events also indicated that Arab nationalism cannot function as a “plausible or compelling ideology for projecting national unity within Arabic- speaking countries,” as indicated by the collapse and fragmentation along ethnic, tribal, and ideological lines of a number of the states affected by the unrest (Iraq, Syria, Libya, Yemen).

Thirdly, Feldman argues that the Arab Spring has fundamentally transformed political Islam. He notes that over the previous decades there had been attempts by various movements associated with the Muslim Brotherhood to attain power via the electoral route. The Arab Spring saw the unsuccessful culmination of this process, he suggests, in both Egypt and Tunisia. But, with the brief rise and rapid eclipse of the Islamic State, this period also saw an attempt to build a state based on Sharia law via non-democratic processes. The failure and removal of the Muslim Brotherhood in Egypt, and the peaceful transformation of the En-Nahda party in Tunisia, the author suggests, mark the “end to political movements advocating political Islamization through democratic means.”

To advance these three theses, Feldman then focuses in some detail on events in Egypt, Syria, and Tunisia, and on the trajectory of the Islamic State. Looking at Egypt, Feldman contends that the people “spoke twice”: first in causing the army to remove long serving President Mubarak; and then in the popular demonstrations which preceded and facilitated the military coup which removed the Muslim Brotherhood and returned the army to power in July 2013. He notes that the events in Egypt contain the (for him) difficult-to-accept lesson that the exercise of popular will and agency can lead away from democracy, as well as toward it.

On Syria, the author accepts that the direction of events—from popular demonstrations to bloody civil war and societal collapse—was “probably inevitable.” Feldman includes a useful discussion on the means by which Alawi domination of the Syrian system was able to cloak itself in Arab nationalist rhetoric. He identifies the sectarian intercommunal reality as the salient factor in making the descent to civil war a near inevitability. Once the sectarian dynamic had become the clearly dominant element, the possibility of other outcomes was foreclosed—locking both regime and rebels into a fight to the finish. From the vantage point of mid-2020, it is interesting nevertheless to note that the “likely final” act of the Syrian civil war, as seen by the author (namely the complete victory of the Assad regime), seems somewhat more contingent and fragile than it did even just a year ago. Syria remains divided, with the conflict not over, and thoroughly penetrated by external powers.

Regarding the Islamic State, the author notes that it “was the real world, practical expression of a specific, modern theory of political Islam that was developed over decades.” Feldman’s discussion of the Islamic State is insightful in that he locates it as a product of political agency, and hence as much part of the Arab Spring as its other, more democratic manifestations. Seeing the Islamic State Caliphate as a “revolutionary-reformist” state, Feldman contends that this “utopian” aspect explains both the shocking acts of the Islamic State (deriving from an effort at the “total reorganization of existing social and political relations, including those governing personhood, family, property, and government”), and the brief but very bright appeal which the new Caliphate exercised over the minds of a considerable number of young Muslims globally.

Finally, looking at Tunisia, Feldman notes that it remains the sole example of successful political transformation produced up to now by the Arab Spring. The book provides an interesting survey of the process whereby both the local manifestation of Sunni political Islam (en-Nahda, led by Rached Ghannouchi) and the political manifestation of the old regime (the Nidaa Tounes movement) were able to make significant compromises and avoid the deterioration into violence which took place elsewhere. Feldman identifies the strength and vigor of Tunisia’s functioning civil society as a key factor in this, in stark contrast to states such as Egypt and (especially) Syria, where the state succeeded in preventing the emergence of civil society bodies that may have been able to mediate between regime and opposition movements. Feldman locates the “exercise of political responsibility” by the Tunisian people as the key element in producing the (relatively positive) outcome of the downfall of the authoritarian Bin Ali regime in late 2010.

The Arab Winter is an engaging work. It provides a useful recap of events over the course of the Arab Spring, and offers some original and interesting insights on each of the episodes discussed. In particular, the comparison of the Islamic State with other, non-Islamic attempts at building millenarian, Kingdom-of-God type political entities strikes me as a promising avenue of inquiry worthy of further exploration. The book, however, is not intended to be seen as an additional short history of the Arab Spring. Rather, Feldman is primarily concerned in advancing the three assertions outlined at the beginning of this review. How convincingly does the book manage this?

Taking the three assertions in turn, I would suggest that the first of them is the flimsiest. Is it really the case that before 2010, Arab politics was centrally defined with reference to outside, imperial powers? The Arab nationalist officers in Egypt, Libya, Syria, and Yemen may have liked to focus their rhetoric on the supposedly nefarious influence of imperial powers. But as Feldman himself acknowledges in his section on the Assad regime, for the most part such rhetoric served to cloak the interests of local power structures, whose actual motivations were decidedly local—and in direct contrast to their rhetoric.

The second assertion, regarding the Arab Spring’s simultaneous confirmation of an existing, uniquely Arab political space—but also of the weakness of Arab identity in an intra-state context—is strong, and particularly relevant to the Syrian and Iraqi contexts (i.e. in the context of multi-ethnic and multi- sectarian states which are defined by their governments as “Arab.”) Feldman points out that Lebanon, once seen as an outlier in Arab political terms, may now be better viewed as a kind of archetype for state fragmentation and near-collapse, and for the splitting of “Arab” societies in the Levant and Mesopotamia along ethnic and sectarian lines.

Regarding the third assertion, according to which the Arab Spring represents a kind of culmination of processes in Sunni political Islam in the Arab world, it would seem too early to draw sharp conclusions in this regard. It is certainly the case that the Arab Spring marked the end of Sunni Islamism’s very long political “apprenticeship” in the Arab world. It also marked two brief and disastrous experiments in governance for Sunni political Islam (the Muslim Brotherhood in Egypt, and the Islamic State in Syria/Iraq).

It is beyond question that this period led to the permanent loss of Sunni political Islam’s status as an untried “solution” to Arab political ills. This status cannot be regained. But given the sectarian realities, ongoing crises and economic failures of the Arab world, it remains at least possible (and perhaps even likely) that future upheavals may again take on the garb of Sunni political Islam. This is particularly the case given the near absence of political trends with a similar level of mobilizing power.

The Arab Winter thus, it seems to me, fails to entirely convince on two of its three central theses. Yet, it is filled with interesting and insightful observations on the case studies presented; it presents a worthwhile meditation on processes which remain far from completion, and which are of primary importance to prospects for stability and development in the Middle East and beyond.

Requiem for a War

The Syrian Civil War threw the country, as well as the entire region, into chaos and bloodshed. A new book attempts to sift through its tumultuous legacy.