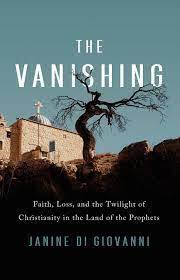 The Vanishing: Faith, Loss, and the Twilight of Christianity in the Land of the Prophets (2021), by the journalist Janine di Giovanni, explores the challenges faced by Christian communities in the Middle East, many of which have driven them out of the region. While the situation of Christians in the Middle East has gained more attention in recent years due to the vast number of refugees from Iraq and Syria, this is a topic that deserves far greater attention.

As a Christian herself, di Giovanni’s interest in this problem is also personal. And, having worked in many of these places as a journalist, she draws on her vast and unique experience in the Middle East, describing interactions with Christians from across the region about the struggles and challenges that they face on a daily basis.

The book covers four territories where Christians have been living for centuries in the Middle East: Iraq, the Gaza Strip, Syria and Egypt. According to di Giovanni, the main reasons for the flight of Christians from these areas are persecution, discrimination, political instability and rough economic conditions. As illustrated in many of the interviews in the book, these are real and valid concerns that motivate many Christians to leave their homelands. The reader is able to connect to these concerns more strongly due to di Giovanni’s presentation of their own words.

However, the book lacks rigorous sources and methodology. Anecdotes are extremely useful for painting the reality of Christians on the ground and makes the book an easy read, but there is insufficient academic research into the reasons behind the departure of Christians from the Middle East. Complementing the interviews with more scholarship would have elevated the standard and perhaps changed some of the conclusions.

With regards to the methodology, it is unclear why di Giovanni only chose to write about Christians in the Gaza Strip, as opposed to the rest of historical Palestine.  Palestinian Christians in all of these areas face difficulties and challenges that encourage them to leave their homeland, and it would have been interesting to know why she decided to omit their stories. Another strange omission is Lebanon. Di Giovanni worked there too as a journalist, but there is no detailed account of its neglect in the book or the situation of Christians in the country. This is odd, especially given the unique context in Lebanon, where Christians hold significant positions of power and influence within the government and public sphere. Including other geographical locations in the Middle East would have strengthened the book.

Besides methods and sources, one can question the reasons di Giovanni focuses on the decrease in the number of Christians in the Middle East. This may stem from the lack of academic research and her insistence on relying heavily on her own personal experiences and interviews. On a general level, the book does not place contemporary emigration in a detailed historical context. Emigration of Christians has increased since the decline of the Ottoman Empire, the complex process of nation-state building, Christians’ desire to avoid conscription into the Ottoman army in the early 1900s, and the strong connections Middle Eastern Christians have with their co-religionists in Europe and North America (for a detailed account see A History of Muslims, Christians, and Jews in the Middle East by Heather J. Sharkey).

This is evident in her analysis of Iraq, and to a certain extent Syria. The author focuses mostly on the flight of Christians as a reaction to Islamic extremism, namely the rise of ISIS and its intolerant and violent attacks. While di Giovanni is correct in pointing out the horrible atrocities and persecution of Christians at the hand of extremists as a reason for emigration in recent years, she pays little attention to the historical developments that have contributed to such a situation, namely the role of Western colonialism and imperialism.

In the case of Iraq, in addition to the war with Iran in the 1980s and the economic struggle the country faced in the 1990s, the US-led invasion and occupation of the country completely destabilized and destroyed the state’s institutions. Emigration of Christians spiked during this period, even before the rise of ISIS. In addition, ISIS, and its precursor al-Qaeda in Iraq, is a direct consequence of Western meddling in the Middle East. For years the US supported, funded and trained Islamic extremists in Afghanistan; this backfired when many members decided to target the US as the enemy and many of them also came to Iraq to fight the US invasion. Moreover, after the US invasion of Iraq, the immense suffering of the people, along with the disbanding of the Ba’athist party, without offering an alternative, created a vacuum for organizations like ISIS to flourish. These events were another important reason for the emigration of Christians from counties like Iraq, which is ironic given that it justified its invasion in Christian religious terms.

My point here is not to play down the role of Islamic extremism in driving Christians out of the Middle East, simply that it ought to be placed in a wider historical context. As such, di Giovanni could have given more attention to the role of Western colonialism and imperialism. This gap is particular evident in her chapter on Gaza, which, as mentioned should have covered the entirety of the Palestinian context. For instance, di Giovanni fails to mention that during the Nakba only a third of the Palestinian Christian population managed to stay within the new State of Israel, with the remaining two-thirds being displaced and dispossessed (for more information see the work of Merav Mack).

This, of course, is a direct result of Western colonial movements and powers. The British Mandate of Palestine illustrates the support the Zionist movement received from the League of Nations and the British Empire. A number of the articles within the Mandate privileged the Zionist movement, highlighting the historical Jewish connection to the land, the Jewish people’s national rights and giving the Jewish Agency quasi-governmental status. On the contrary, there was no mention of the historical connection of Palestinians/Arabs to the land or their national rights. In fact, the words ‘Palestinian’ and ‘Arab’ are not mentioned at all. In addition, the Zionist movement was further supported militarily when the British Empire trained and equipped Jewish forces during the Arab Revolt (1936-1939) and during World War 2. Likewise, many international commissions and recommendations disproportionally favored the Zionist movement, suggesting different resolutions that gave Jews far more land in proportion to population and land ownership. The UN Partition Plan in 1947 is a good illustration of this. The UN promised the Jewish population, who were around 30 percent of the population and owned around seven percent of the land, 56 percent of historical Palestine. All of the above support for the Zionist movement, whether it be political, economic or military, allowed the Nakba to take place (for a detailed account see The Hundred Years’ War on Palestine by Rashid Khalidi).

Likewise, if Islamic religious extremism is mentioned in the Palestinian context, in the form of Hamas, as a key factor for Christian emigration, then it would have been helpful for di Giovanni to mention the role of Jewish and Christian extremism. That is to say, certain Jewish religious nationalist groups are at the forefront of Palestinian ethnic cleansing in the West Bank and East Jerusalem; including building illegal settlements on Palestinian Christian land. Ironically, many of these very movements who wish to see Palestinian Christians leave their lands are supported by Evangelical extremists in the US and Europe (a Haaretz investigation estimates that around $65 million dollars have been invested in Israeli settlements and settler organizations between 2008-2018). One could probably argue that Christian Zionists play a bigger role in the emigration of Palestinian Christians than Hamas does, because they support aggressive policies towards Palestinians such as the military occupation and settlements. In a survey conducted by the Palestinian Center for Policy and Survey Research in 2020, the main reason behind the desire of Palestinian Christians in the West Bank and Gaza to emigrate was economic, a factor that cannot be separated from the Israeli blockade of the Gaza Strip and occupation of the West Bank. Yet, in di Giovanni’s book, only Islamic extremism is properly covered, thus limiting the overview of Jewish and Christian role in the ‘vanishing’ of Christians from historical Palestine and other Arab states.

Despite these shortcomings, di Giovanni correctly mentions that the many reasons for Christian emigration—such as difficult economic conditions, civil unrest, dictatorships, corruption, religious extremism and discrimination—are the same reasons many Muslims are also seeking to emigrate. Whether it be the American-led invasion and rise of ISIS in Iraq, Assad’s dictatorship in Syria, the Israeli occupation and the failure of the Palestinian leadership or the military dictatorship in Egypt, all of these factors also oppress Muslims and other religious communities in the Middle East. This very much challenges popular assumptions that only non-Muslims are the victims of Islamic extremists and states who embrace Islamic jurisprudence as a source for legislation.

All in all, The Vanishing is an important contribution to literature on contemporary Middle Eastern Christianity. It seeks to highlight a growing problem in the region and to tell it from the perspectives of people on the ground who are directly impacted. For readers living outside of the Middle East and unfamiliar with its characteristics, the book can serve as an easy introduction to the rich history of Christianity in the region and some of its growing challenges. For readers who may be more familiar with the Middle East, the book can stimulate further reading and research into the situation of Christians, and be used as a case study to understand how many Western Christians perceive the situation Middle Eastern Christians live in.

* Janine di Giovani, The Vanishing: Faith, Loss, and the Twilight of Christianity in the Land of the Prophets. PublicAffairs, 2021, pp. 272.

Requiem for a War

The Syrian Civil War threw the country, as well as the entire region, into chaos and bloodshed. A new book attempts to sift through its tumultuous legacy.

A new book argues for the historic significance of the Arab Spring. Does it succeed?