In October 1973, the poet and singer Leonard Cohen—thirty-nine years old, famous, unhappy, and at a creative dead end—traveled from his home on the Greek island of Hydra to the chaos and bloodshed of the Sinai desert when Egypt attacked Israel on the Jewish high holiday of Yom Kippur. Moving around the front with a guitar and a group of local musicians, Cohen met hundreds of young soldiers, men and women at the worst moment of their lives. Those who survived never forgot the experience. And the war transformed Cohen. He had announced that he was abandoning his music career, but he instead returned to Hydra and to his family, had a second child, and released one of the best albums of his career. In Who by Fire, journalist Matti Friedman gives us a riveting account of those weeks in the Sinai, drawing on Cohen’s previously unpublished writing and original reporting to create a kaleidoscopic depiction of a harrowing, formative moment for both a young country at war and a singer at a crossroads. 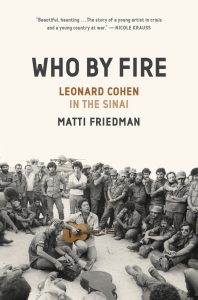 Not everyone at the front knew who Cohen was, but if they did, the song they knew was “Suzanne.” He seems to have played it at most or all of the shows, and in his recollections, Cohen recounts traveling in the desert: “I’m killing an arrogant Israeli officer who won’t stop bugging me to sing ‘Suzanne.’ The balance is returned. Justice is done. It’s not certain I’m making that up.”

Today Cohen might be the foreign artist whose songs are translated and performed most often in Israel. New Hebrew versions of Cohen songs appear every year, and some songs, like “Lover Lover Lover,” have been translated more than once. By the time Cohen showed up in the war, there was already a version of “Suzanne” circulating in Hebrew. It was the work of a singer- songwriter named Gidi Koren, founder of a band called the Brothers and Sisters, a name he chose as a tribute to the Mamas and the Papas. Gidi loved “Suzanne.” It was so different from everything else he’d heard, so strange to Israeli ears. His translation, which might have been the ﬁrst Hebrew version of a Cohen song, was performed but never recorded, and was eventually forgotten, surviving only as a ﬁle on Gidi’s computer.

The Brothers and Sisters were a popular band but you couldn’t make a living from music in Israel in those days, and that wasn’t Gidi’s real job. He’d just ﬁnished medical school and was an intern at a hospital near Tel Aviv. He was twenty-six, with a small daughter and a pregnant wife. He was in the middle of a shift on Yom Kippur when the army suddenly started pulling staffers from the ward, when “the music started,” as he put it, meaning the sound and rhythm of an Israeli crisis.

Helicopters began thumping outside and soon the orderlies were rushing into the burn unit with ﬁgures in torn green uniforms, men his age coming in scorched all over from explosives, mostly third-degree, the kind of burn that penetrates the skin and muscle and brings your chances far down. They were coming from their tanks along the Suez Canal via overwhelmed ﬁeld hospitals in Sinai. He did what he could—liquids, morphine, disinfection. Some of them could be saved, and later they’d get new skin, but a lot of them were lost by the time they arrived. The senior hematologist would come around and Gidi watched her stand by the beds and decide when to turn off the machines.

When the war got worse, Gidi was sent down to help in the ﬁeld, taking a transport ﬂight to one of the big air bases in Sinai and then overland to a hospital—a few tents and shipping containers, a mobile operating room, hot blasts of sand as the choppers landed with more green ﬁgures on stretchers. He doesn’t remember where it was, just “the desert.” The mood was as dark as you’d expect, not just because of the work but because the wounded soldiers were bringing in the worst news of the war—battles gone wrong, whole units up in smoke. He doesn’t remember individual stories. He didn’t want to see these ﬁgures as people with names. By this time he already had news of the kids he’d grown up with: Lipa Milnov had been killed, and Menachem Silman, and Yakov Sofer from the soccer team. More soldiers came in, unconscious from blood loss or morphine. He applied bandages like a robot, and moved the ﬁgures from tent to tent, and someone said Leonard Cohen was outside.

That didn’t make any sense. But Gidi went out into the sun-light and there he was, just Cohen, in fatigues like any other soldier. Gidi didn’t dare speak to Cohen, or say anything about translating “Suzanne.” He can’t remember why. He doesn’t think Cohen was inaccessible. The presence of Leonard Cohen at this ﬁeld hospital was so unlikely that he may not have believed it was actually happening, like all of the other things that he was seeing and doing.

Cohen was standing a few steps away from him, playing his guitar. The medics and doctors and nurses stood opposite the singer in bloody smocks. For a moment, no helicopters landed. The scalpels rested on trays and the tents were quiet. Cohen sang “Suzanne.”

Excerpted from WHO BY FIRE copyright © 2022 by Matti Friedman. Used by permission of Spiegel & Grau LLC, New York. All rights reserved. No part of this excerpt may be reproduced or reprinted without permission in writing from the publisher.

From Adoration to Disillusionment

The story of how the Israeli literary community fell in and out of love with Nobel-winning author Olga Tokarczuk.

How cinematic depictions of the Mossad spy became a reflection of shifting attitudes towards the State of Israel.