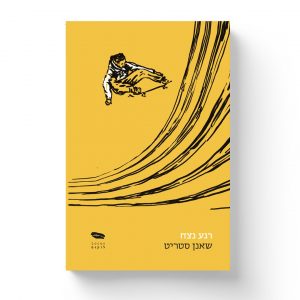 Jerusalem has captivated its residents for many years—the old stone walls, the mountain air, the constant mishmash of old and new. Each and every one of these elements has been discussed, analyzed, mused upon, over and over, to such an extent that I, who has spent my entire life in this mythological city, cannot help but feel an aversion to yet another clichéd depiction of it. However, one cannot avoid the true magic of this place, a fact proven to me time and time again when I walk in the streets of Jerusalem, read books about the city, or listen to songs celebrating it.

One prominent Jerusalemite creator is Sha’anan Streett, founder of Hadag Nahash, Israel’s most successful hip-hop/funk band. The band was formed in Jerusalem and is made up of Jerusalemites, which naturally means that the city makes frequent appearances in their songs, with famous lines such as “Jerusalem, what a bomb city/walking in the street, feeling like walking in a melding pot/a thousand cultures, everybody has a brother and nine sisters.”

It is Streett’s strong connection to Jerusalem and deep understanding of its delicate balance between cultures that made his debut novel, A Moment of Eternity, a novel with substance and interest despite flat dialogue and a quite generic plot line.

On opening the novel’s cover, I noticed that that the beautiful illustrations accompanying the text are the work of “Brothers of Light,” a well-known graffiti artist in Jerusalem. This starting point makes it clear: Jerusalem is a central component, a main character, of this novel.

The novel follows 21-year-old Elnatan, known as “Elna,” and his adventures as a skater and neophyte graffiti artist in Jerusalem. The choice of a group of skaters—teenagers, a bit out of place rolling around in the ancient city, mixing old and new—as the subject of the novel mostly reflects Jerusalem’s character perfectly. Mostly, but not always.

There are hints across the novel that the story it tells is unfolding sometime during the nineties. Here, we reach both the novel’s main problem and its greatest achievement: it is unclear when exactly the plot is set. While discussion of nineties technology and landscapes help in assuming the decade, it is never mentioned in the novel specifically. In addition, together with an epilogue that discusses the rise of skater culture, the slang that the characters deploy is often mixed with the street language of the present day—or at least something close to today’s slang. This mixture of dialects might have been an attempt by Streett to make his story relevant and current, but it comes across as detached and strange. I felt confused and disoriented, just like a skater, midair, performing a jump and not knowing exactly where I am.

The language of the novel, somewhat frozen in time, somewhat new, reflects the feelings a lot of veteran Jerusalemites—presumably including Streett—have about their city. In the descriptions of the neighborhoods and Jerusalem’s different landmarks, nostalgia seeps out of every single word. Whether still in the city or not, it sometimes seems that every resident retains a lingering nostalgia for the Jerusalem that existed decades ago. As Hadag Nahash sing: “I returned to Jerusalem / you are the only one, Jerusalem / the hummus here is good / I could use some peace and quiet.” The idea of Jerusalem as the quiet city, stuck in time compared to Tel Aviv, resides in both the band’s songs and the pages of the novel.

Therefore, there are two ways to view A Moment of Eternity. Firstly, as a story about skaters; secondly, as a love letter to Jerusalem. While I do believe that Streett meant to pay homage to Jerusalem’s skating culture, and while it is the main subject of this novel, I think that there is a greater benefit in reading this book as an intimate homage to Jerusalem, filled with longing and affection. As Streett’s characters skate around Jerusalem together, I did not always focus on their often flat dialogue, but rather on places that I, as a Jerusalemite, have known my entire life. Places such as Gan Ha’Sus, the night life on King George and Hillel, even less aesthetic places like the industrial area of Talpiot. The novel’s syntax is often unremarkable, the slang not always believable; but the novel’s key selling point is the nostalgic adventure it provides to the Jerusalem-born.

While Streett does live in Jerusalem (other members of his band have left the city over the years), A Moment of Eternity reads like the work of a person who left Jerusalem years ago, and who is coping with yearning and nostalgia by writing a book about it. This framing perhaps makes the detached feeling that the novel conveys a little clearer: maybe because the writer is writing about a group of people decades younger than him, maybe because the city, like all other cities, is constantly changing. Whether Streett misses being an adolescent, or misses the city as it used to be, this novel freezes Jerusalem, and its residents, in time.

Despite this, there is a measure of relevance that saves the novel, just as Jerusalem the city continues to retain its relevance to younger generations today. More than anything, it conveys an understanding of friendship perfectly, most prominently that between Elna and Yonni, the outcast of the group. The two do not talk much, but they enjoy spending time together, making graffiti and practicing their skateboard moves. Even though the novel, with its too-good-to-be-true and somewhat clichéd ending, is too simple at times, the simplicity of the friendships in it is realistic and touching.

A Moment of Eternity is a decent holiday read, albeit one lacking the relaxed satisfaction of a simple plot line and two-dimensional characters falling in love with each other. This is indeed a simple story; but the characters deal with deep issues, such as non-existent parents, poverty, and serious physical injury. While I was sure that the “they went through hardships but they dealt with them together and managed to become stronger because of it” trope would make me roll my eyes, the nostalgia and friendship that accompanied it neutralized my cynicism. In this sense, it is in the novel’s favor that it is an easy read, because it allows the reader to get swept away in the skater lifestyle and the ambience of Jerusalem while reading it curled up in a blanket on a rainy afternoon. Moreover, something that makes this novel truly touching is the very real way in which every single member of the skater group has something that they care passionately about—whether that is becoming the best skater in Jerusalem, being accepted to art school, or their daily jobs.

While not a great novel, A Moment of Eternity is a rapper’s interesting first attempt at writing literature. There is no doubting the deep love for Jerusalem that seeps out of every page. The plot and the subject of the novel do not matter much, neither do the characters. While I did not feel connected to any Streett’s characters, I did feel my own measure of Jerusalem-focused nostalgia wash over me. This, I think is the true magic of this city: that a rapper can write a book about the Jerusalem of decades ago and succeed in rousing the nostalgia of a younger generation of Jerusalemites. In A Moment of Eternity, Streett chooses to focus this affection on skaters in the city, but it could have been any other group of young misfits with a common love for something tying them together. It’s a trope that may be old but can never truly be exhausted—perhaps like Jerusalem itself.

Oded Even Or Yakov Z. Mayer