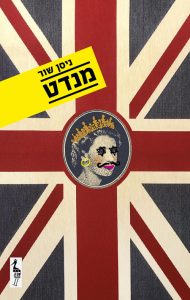 Four men walk into Death Row: the legendary heads of the Jewish Agency, the Irgun, the Haganah, and the Palmach. One by one, David Ben-Gurion, Menachem Begin, Yitzhak Sadeh, and Yigal Allon are subjected to all manner of degradation and humiliation at the hands of their British captors, before being summarily hanged in the gallows of Acre Prison.

This graphic patricide, dated September 1946, serves as the launching point for Mandate, a new novel by Nissan Shor. The book asks—and answers, quirkily—the question of how history would have unfolded had the British Mandate for Palestine been made permanent.

The shocking opening scene is perhaps the book’s most effective, but it is also a departure from the tone of the nearly 300 remaining pages. We are soon introduced to our hero, Avinoam Tobolsky, one of the few Jews in Palestine elated by the news of the execution. Born in Czernowitz, Romania in 1920, he moved to Vienna and departed for Palestine just weeks before the Anschluss. He spends his evenings cruising the beachside casinos of Tel Aviv.

One night, by the shore, Tobolsky catches the eye of a certain Private John Baxter. Their liaison is described thusly:

“This was Tobolsky’s first encounter with an Englishman. How different they were from the supercilious Austrians of Vienna, and certainly from the people of Czernowitz, and most of all from the rude Jews of Palestine. They carried themselves differently. They had a natural aristocratic air. Upright and self-confident. He was not brought up in their culture, but he was willing to adopt it and make it his own. […] Tobolsky extracted and sucked from Baxter the essence of the greatness of British culture. And what did Baxter get from him? A devoted body and sparkling eyes, ready for anything and everything.” (p. 21)

Baxter teaches Tobolsky to dress, to recite Keats, Shelly, and Wordsworth, and to worship Wilde. This education of a Jewish dandy, once complete, sets in motion the novel’s two main preoccupations. The first is a seemingly endless series of sartorial dilemmas, forming the heart of Tobolsky’s tragic existence in a land far too hot for tweed and velvet. But his defining traits—a deep Anglophilia twinned with a no-less-deep contempt for the Land of Israel and the Zionist project—also make him the perfect candidate to assist His Majesty’s Government in its efforts to solidify British rule in Palestine.

What set Mandate’s alternate history off in that direction? A paramilitary attack on a hunting lodge in Ramle wounds the High Commissioner and kills his loyal hound and companion, Richard the Lionheart. A parliamentary inquiry is formed, and its conclusion is unequivocal: no independent states for the Jews and the Arabs. The UN General Assembly follows suit, and the British Mandate plows on—with an eye to full-scale colonization.

Mandate’s publication is refreshing in at least one respect. There is no lack of Hebrew-language dystopian fiction, which shares some traits with alternate history; and Altneuland, a utopian novel (an alternate history of the future), is the urtext of political Zionism. But hardly any proper alternate histories of note have been written in Israel. This is somewhat surprising, given an unwritten but deeply felt first principle informing Israeli thought and action to this day: that Israel’s birth was anything but inevitable, that the non-birth of the State was the likelier scenario.

Like many Israeli readers, I will always have time for a romp through Tel Aviv in the 1940s. Like many Israelis of a certain political stripe, I find myself both fascinated with and mildly embarrassed by the actions of the Irgun and the Lehi. The question of how things might have turned out had the British never left is more than just a fun thought experiment—it is a fantasy that many people here have entertained. How better to kick off this (hopefully) nascent genre of Israeli alternate history than with the scenario Nissan Shor has chosen?

But there’s a fine line between alternate history and ahistory, one that Mandate straddles at times. For an alternate history to say something useful about history, there are some rules it should abide by. The Cold War historian John Lewis Gaddis detailed a particularly sensible one in his book The Landscape of History:

“You wouldn’t, in a chemistry laboratory, attempt to identify a critical compound by throwing everything available—eye of newt, say, or toe of frog—into a giant bubbling cauldron to see what happens. You’d instead change only a single variable at a time while keeping the others constant. It’s much the same with counterfactual history… it’s perfectly appropriate to ask what might have happened had the United States not imposed the oil embargo on Japan after the takeover of French Indochina. It’s not appropriate to ask what might have happened if the Roosevelt administration had combined that decision with an offer to transport Free French forces to that part of the world, together with a massive buildup of American forces in the Philippines, together with an effort to settle the Soviet Union’s war with Nazi Germany so that Stalin could shift his forces east and also intimidate the Japanese.” (p. 101-102)

It is always interesting to speculate on roads not taken. To be sure, any number of acts or omissions might have prolonged the British Mandate and stopped the Zionist movement in its tracks. Mandate’s plot is the result of a series of conditionally dependent counterfactuals. What if the Zionist paramilitary groups had pushed harder? But also, what if the fringe movement of British Israelism, that believes that the British are the true descendants of the lost tribes of Israel, had somehow managed to gain control of the British government? What if one of that movement’s acolytes, a Rasputin-like figure named Paul Arnold, became Adviser to the King on the Fate of the Jews? What if, just as Britain was in the throes of imperial retreat, the sun finally setting on the British Empire, Arnold had steered British policy on Palestine in the opposite direction? What if our hero Tobolsky had successfully convinced significant portions of the Jewish public into supporting this new policy, and was eventually appointed leader of a puppet government in Palestine? What if Palestine—a land that had given the British so much grief, was to remain one final outpost of empire, “a national home for the English who would return home after thousands of years in exile”?

The combined effect of so many “what ifs” is what Gaddis called “a historiographical witches’ brew where anything goes and no particular outcome is any more probable than any other.” Of course, good fiction, unlike good history, can and should break any rule it wishes to. But Shor devotes a significant part of his book to politicking and machinations, without providing some of the scaffolding necessary to support his elaborate alternate history. For example, how did the prolonged Mandate shift the fraught regional dynamics over the ensuing decades? Why does the Holocaust not have anywhere near the historical weight in his story as is does in our reality?

And while plenty has been said—and remains to be said—about the infatuation of Brits with the Holy Land, British Israelism is a very minor part of that story (the movement warrants barely a footnote in Bible and Sword, Barbara Tuchman’s seminal work about England and Palestine—but it is a lovely footnote at that. “‘British’ is derived from the Hebrew ‘Berit’ meaning ‘covenant’ and ‘ish’ meaning ‘man’—ergo, ‘man of the Covenant,’” Tuchman tells us of their gonzo beliefs. “The Saxons were said to be ‘Isaac’s sons.’”) In an attempt to boost the movement’s profile, Shor highlights the “fact” that the congenitally deaf and schizophrenic Princess Alice—mother of Prince Philip, Duke of Edinburgh and husband to Queen Elizabeth—served as patron of the British-Israel-World Federation, when it was actually a different Princess Alice, Countess of Athlone and mother to far lesser-known issue.

Wholesale rewriting of twentieth-century history notwithstanding, Mandate generally doesn’t take itself too seriously, and that is where it succeeds most. The book is not really about the British and what Tuchman calls the “spongy ground” of myths, legends, traditions, and ideas that sent them here on crusades both religious and secular. Shor has some interesting things to say about the creepily porous boundaries between philosemitism and antisemitism, embodied here by the British Israelites, a subject that is rich with unmined literary potential. And he does give a possible answer to the question of what life here might have been like if the British had stayed. That answer is pretty grim: neighborhoods are razed, Jews and Arabs are exiled. In 1968 the Beatles do finally get to perform the concert infamously canceled three years earlier, but the performance is doomed in other ways.

Nissan Shor is a veteran journalist, columnist, and documentarian (he is probably best known for Dancing with Tears in Our Eyes, his magisterial tome from 2008 covering the history of Israeli club culture). His entertainingly pulpy novel is about Israelis, first and foremost. Avinoam Tobolsky, pamphleteer and founder of the England Lovers’ Association, is a loving parody of the sort of Anglophila that has deep undercurrents in contemporary Israeli culture. Though Israel underwent a rapid process of Americanization in the 1990s, many Tel Aviv tastemakers in the media have remained staunch Anglophiles. And that obsession extends beyond the cultural elite. Spared the worst excesses of empire, many Israelis have developed a romantic fascination, bordering on a weird reverse orientalism, with the days of the Mandate. By taking his counterfactuals to their not-strictly-logical extremes, Shor reminds us—as if anyone familiar with the history of this region needs reminding—that lofty ideals, good intentions, and pleasing aesthetics do not guarantee positive consequences.

Mandate asks us what exactly it is that we’re nostalgic for. A time of open borders, before the hardening of the Sykes-Picot lines? An era when Europe was literally at our doorstep, before it turned its back on us? Before the very best of intentions collided with reality?

Oded Even Or Yakov Z. Mayer

A new English selection of Avrom Sutskever's essential prose reveals the fascinating tension between the great Yiddish writer's Israeli present and his East European past.