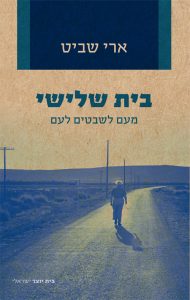 Ari Shavit has a thing for David Ben-Gurion. The founding father, who Shavit describes as “the Israeli Bismarck,” takes center stage in the latter’s new book, Bayit Shlishi [‘Third Temple’]. While the veteran journalist and the legendary Prime Minister are both avatars of Israel’s Ashkenazi aristocracy, the resemblance between the two would appear to end there. Ben-Gurion was famously ascetic; Shavit’s new book comes after #MeToo Allegations against him surfaced in 2016 and again in 2018. Ben-Gurion, widely traveled and fluent in six languages, nevertheless had little patience for Jewish American elites; Shavit’s best-seller My Promised Land, excerpted in the New Yorker, was praised by such luminaries as Thomas Friedman, Simon Schama, and Leon Wieseltier.

Once again, Shavit is at the task of explaining Israel to the world and to itself. Published this time in Hebrew rather than English, this new book is both more and less ambitious than My Promised Land. Fluent if workmanlike in its prose, it foregoes the earlier book’s evocative historical sweep and instead aims at diagnosing the Jewish State’s present and proposing a path forward. Whereas My Promised Land derived its narrative force from the kaleidoscopic set of accounts that it presented, this book is more like a Shavit solo: a few academic citations aside, it is scored for one voice. What this means in practice, is that we get the view from Tel Aviv: like any vantage point, it is constrained by the window that frames its perspectives.

Shavit’s story will be familiar to any close observer of the Jewish State. Israel’s early days were a period of herculean state building and social solidarity, driven by self-sacrifice and an inclination towards the collective. All of this was made possible by Ben-Gurion’s ideology of mamlachtiyut, a strange portmanteau that smudges “government” and “monarchy” into something close to statism: an obsessive focus on institution building and national unity, a subordination of the individual to the group. Revolutions are cruel beasts, and in this respect the Zionist one was no different. As Shavit notes, “Ben-Gurion’s brutality paled in comparison to Robespierre’s” (all translations are my own)—but this doesn’t mean that it was without cost.

Such a heavy-handed approach is difficult to sustain forever, and Shavit’s story begins in earnest in 1977, when a right-wing government led by Menachem Begin catapulted to power on the strength of long-ignored Mizrahi votes and outrage over the way Ben-Gurion’s successors botched the Yom Kippur War. Shavit traces eight “rebellions” that emerged from this political earthquake: Mizrahi, National-Religious, Haredi, Arab, Liberal-Judicial, Neo-liberal, Russian, and Millennial. These factions remade Israeli society by scrambling it into something much more chaotic, fragmentary, and dynamic. The tradeoff is a familiar one: uniformity for diversity, a stifling conformity for a rambunctious incoherence, and the rise of self-expression at the cost of some semblance of national purpose.

Shavit’s story continues with his account of contemporary Israel split between a dysfunctional government and a thriving private sector. First, the bad news. As Shavit sees it, the current political class has shredded the legacy of its predecessors and undone the very institutions that are the Israeli inheritance. The visionaries who built the country have given way to the mediocrities who unimaginatively run it. As he puts it, “there is no political heir to Ben-Gurion” on the right or the left, in form or in substance. Political decay, balkanization, a vanishing center, and a degraded civil service are all evidence of the kind of breaking apart that mamlachtiyut was expressly designed to prevent. Shavit notes ominously, citing American, German, and Biblical examples, that the eighth decade of a country’s existence is propitious for internecine strife. He worries over Israel’s population density and urges it to be alert to climate change.

But Shavit is the very model of the “on the one hand, on the other hand” model of political commentary, and he delivers good news to leaven the bad. The reasons for hope are many, and they comprise what Shavit calls “the real Israel”: soaring birth rates, relentless innovation, an ethos of service, a passion for volunteerism, thriving culture and higher education, joie de vivre, and a special zeal for family and community.

From this quickly sketched portrait of contemporary Israel, Shavit pivots to the prescriptive. He calls for a new Israeliness, one defined by duality and synthesis: a “shatnez” of modern and traditional, East and West, hard work and vibrant play, personal freedom and communal cohesion. “The answer,” Shavit writes, “is the duality, the doubleness, and the hybridity.” He continues: “The difference between the success of the true Israel and the failures of political Israel begins and ends with one fact: the former has harnessed Israel’s contradictions creatively, and the latter has been paralyzed and degraded by them.”

Shavit knows that countries, like people, can’t simply wind back the clock to an earlier era and dwell in the past, and so he has some ideas for how to update the code. He asserts, provocatively, that Israel ditch any lingering affection for Americanization, and instead adapt the norms of Denmark and Singapore: small nation states defined by strong cultural cohesion and the mix of vigorous central governments and dynamic private sectors.

But looking to the cohort of diminutive but successful countries can only provide rough comparisons and intriguing case studies. Shavit has something more ambitious in mind: Mamlachtiyut 2.0, a renovated and reimagined version of Ben-Gurion’s statism updated for the twenty-first century. The final section of Bayit Shlishi sounds a clarion call for this new paradigm; the unfortunate news is that this is the weakest part of his book.

Perhaps this was always bound to be the case. Shavit’s success at describing Israel evaporates into the ether when it comes time to chart its course forward. He urges the forging of new civic compacts with the Arab and Haredim sectors but doesn’t deliver on the specifics. These things are far easier said than done, of course, but Shavit wants to both say them and show how they’re done. His thinking about the Palestinian conflict incurs heavy debts to Micah Goodman. Goodman, another of Israel’s public intellectuals/ explainers, has lately become associated with an approach that seeks to shrink—rather than solve—the conflict. As Shavit puts it, “all of Zionism revolves around three words: [a] large Jewish majority.” How to honor this while also securing the homeland is what stumps the right and left. I wonder if Shavit’s articulation of his position—which maintains the need for both separation from the Palestinians and absolute military freedom for the I.D.F.—will fare any better.

Shavit is undoubtedly right on the big questions: his precious and elusive center needs to be rebuilt, even as Israel’s compact with its periphery needs to be renewed and revised. The dynamism of its private sector stands in stark contrast to its sclerotic government. The divisions Bibi widened and aggravated will be slow to heal. He is surely correct to note that the threat of a large scale and conventional war cannot be ruled out, even in an era thick with drones buzzing overhead. As he closes the book, “there will be no Fourth Temple.” The Third one, which gives the book its Hebrew title, refers to the Modern State of Israel. It is unlikely that we will see another. No one wants to be culpable for squandering a miracle.

Despite these challenges, Shavit claims that he is an optimist, and truly, how can one not be? The Jewish State, despite riding the COVID-19 rollercoaster, is providing the data that the world pores over to chart the way forward. Israel’s covert war against Iran feels like real life science fiction. Its remarkable new governing coalition, uniting the political spectrum from the hard right to Islamists to what remains of the Israeli left, is an astonishing feat of political engineering. Early reports of its imminent demise were premature—even as predictions about its future remain distinctly uncertain.

The subtitle of Bayit Shlishi reads “From a Nation to Tribes to a Nation”: the cover features Ben-Gurion walking off into the distance, lonely and purposeful on a winding road. Shavit’s book captures this alt/neu energy, a brand of futuristic nostalgia that seeks to capture Ben-Gurion’s strength while excising his blind spots. It addresses an Israel that is young but no longer extraordinarily young and worries about its unruly adolescence. It leaves unanswered the question as to whether the path forward lies in going back to the Old Man from Płońsk, or in setting out in stranger and more unexpected directions.