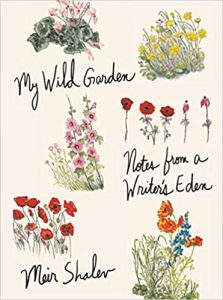 For some enthusiasts, gardening is an eccentricity, the peculiar addiction of pensioners or lonely widows who bring their plants to the brink of anthropomorphism. For others, fussy dogmatists and subduers of nature, it is an unappeasable search for order, for “the right way of doing things.” But what might gardening mean to a writer beholden to no other eccentricity or dogma than Jewish literature?

With his latest book, Meir Shalev—a versatile Israeli author of fiction, memoir, biblical studies, and children’s stories—offers a freewheeling horticultural homage, less of a how-to for aspiring gardeners than a how-to-think-Jewishly-about-it. Shalev’s own garden serves as a point of departure for literary musings that bloom into a kind of “autobiography with flowers.” The author himself describes My Wild Garden as “simply a collection of impressions of a modest wild garden and a gardener who tends it and looks after it, someone who, at a relatively late age, found himself a hobby, and perhaps even a new love.”

That love happens to run in Shalev’s family. His grandfather planted a vineyard and an orchard in Nahalal (the moshav where Shalev was born in 1948). His mother cultivated a small garden with plum and pomegranate trees in a Jerusalem housing project. Shalev concedes he is no botanist. “Although I’ve always loved nature, I had precious little experience in gardening.” This, then, is an endearing book by an amateur for amateurs, readers who may not know a daisy from a dahlia.

Shalev begins with a plant’s-eye view of the garden next to his house, located where the Jezreel Valley meets the Lower Galilee, and where nature meets human nature. It is not a harmonious composition with manicured arterial paths, geometric beds, and well-trimmed hedges, like the Baha’i gardens in nearby Haifa and Akko, but a rambling ensemble, “a collection that lives, breathes, eats, drinks, and reproduces.”

With a practiced hand, Shalev wheedles buds out of bushes, cultivates his colonies of cyclamen and sea squill, and pays obeisance to his perennials. We see him, trowel in hand, with knees blotting up moisture from the soil, as he prunes, sows seeds, buries bulbs, and generally tries with great vigor to propitiate the powers of nature. We watch him tend to a large pear tree in which fruit bats gorge themselves; a lemon tree from which he makes ten liters of limoncello a year; terebinth trees; and several young olive trees. Throughout, we enjoy his enjoyment in eating fruit which one has produced oneself, while at the same time acknowledging that the gardener serves his creation, not vice-versa. Shalev savors both the demanding discipline and the simple monotony of manual labor. “This patience is not something I brought to the garden, but rather something I received from it. You could say that I grow plants in the garden, and the garden grows patience in me.”

Humanity was born in a garden—placed there, according to Genesis, “to serve it and to cultivate it.” As in the Garden of Eden, so too in Shalev’s unkempt patch: life and knowledge are derived from the fruit of trees. In a witty prose expertly translated from the Hebrew by Joanna Chen and charmingly illustrated by Refaella Shir, Shalev casually grafts his patience onto forthright confessions of his own failures and follies. The triumphs and defeats of his plantsmanship resemble a dance step: advance, setback, advance, setback. One imagines he would agree with Jamaica Kincaid’s observation in My Garden (Book): “I have learned as much through my own conceitedness and from my own mistakes as I have from all the great gardeners I have met.”

But amidst the budding and blooming that bestow such bliss, Shalev has learned something else, too:

“The work of writing, which I began late, and the work of gardening, which I began even later, taught me that there are processes that cannot and should not be forced… This is exactly how I wait for a story that needs to ripen slowly, to get accustomed to its protagonists, to become familiar with the storyteller, and the words that must get used to the plot they are forming and even neighboring words with whom they share a page.”

In this respect, Shalev is no amateur. In his novels, Shalev blurs the borderline between the natural and the supernatural into a Hebraic magic realism. Consider, for instance, his first novel, The Blue Mountain, in which the narrator describes mail-carrying pelicans, a pent-up swamp breaking through the earth’s crust at the touch of a hoe, and a talking mule. The novel features a cast of Russian-born settlers and their descendants who wish to re-create the Garden of Eden in the Jezreel Valley. The legendary planter Mirkin creates an orchard—described as “his private Eden”—on what had been swampland. The grandfather, a planter and grafter of trees, loves reading The Harvest of the Years by Luther Burbank, the American plant expert.

“He grafted onto a single sour orange stock branches of orange, grapefruit, and tangerine. “My quadratic equation” [etz arba’t ha-minim], he called it, and once the wondrous citrus began yielding its various fruits, he went on filling the village with his mad experiments, which soon began to cross-pollinate each other. Muscat grapes rotted high on the unpickable branches of cypresses, and Iraqi dates turned yellow on plum trees. Eventually grandfather grew alarmed […] but the trees kept going strong.”

Trees figure, too, in Shalev’s second novel Esau, an extended allusion to the biblical Jacob and Esau. The twins’ grandfather relates a story:

“Once upon a time, trees didn’t have any roots and they could walk. But they didn’t give fruit because they were too busy with wars, expeditions, and courtship. So they got together and decided to have themselves planted in the ground.”

As in his novels, Shalev cannot help but spin across My Wild Garden a web of biblical allusions, verses, and idioms. This will come as no surprise to readers familiar with The Bible for Now (originally Tanakh Achshav, 1985), based on Shalev’s popular television presentations, and Beginnings: Reflections on the Bible’s Intriguing Firsts, both of which showed Shalev to be a deft reader of the Bible’s language and an admirer of what he called its “capacity to prompt us to weave new stories within and around it.”

In My Wild Garden, Shalev observes that characters in the Hebrew Bible seldom take aesthetic pleasure from flora:

“Very few wildflowers bloom in this book of all books. The Bible includes many plants that relate to working the land, those that are useful to the farmer and those that are harmful…. It also includes aromatic plants, varieties of myrrh, spikenard, and frankincense, which are all related to religious rituals. The thornbush and dill play a starring role in prophecies about destruction… and the vine and fig play a starring role in prophecies about blessings. As for merely lovely flowers—there are almost none.”

Still, there are some. Shalev writes that Joshua Ben-Nun used the sea squill “to delineate land belonging to the tribes.” His olive trees remind the author of the branch delivered to Noah signaling the end of the Flood. He cites a phrase from Deuteronomy, borrowed by the poet Natan Zach and set to music by Shalom Hanoch, which forbids cutting down trees around a besieged city: “Because man is a tree of the field.”

Clearing brambles, Shalev remembers the parable Yotam shouts down from Mount Gerizim (Judges 9:9-15). The trees went out to anoint a king to rule over them. After having approached first the olive tree and the fig tree, they turned to the vine: “Come and reign over us.” The vine replied: “Shall I leave my wine that cheers God and men and go hold sway over the trees?” Finally, the trees urged the bramble: “Reign over us.” And it was only the lowly bramble that agreed to serve as king of the trees.

When not invoking the Bible, Shalev entwines his garden with rabbinic literature. As he crawls on all fours uprooting flourishing thistles, he remembers a midrash in which Hanina ben Pazzi teaches: “These thorns are neither weeded nor sown, yet of their own accord they grow and spring up, whereas how much pain and toil is required before wheat can be made to grow.” When forced to chop down a thirty-foot chinaberry tree, Shalev cites a passage from Pirkei D’Rabbi Eliezer: “When a tree that bears fruit is cut down, its moan goes from one end of the world to the other, yet no sound is heard.”

Finally, Shalev follows the tendrils of his plants into modern Hebrew poetry and prose. Musing on poppies, Shalev turns to their use in poems about fallen soldiers by Haim Gouri and Natan Yonatan. Thorns bring to mind a poem composed by his father, the poet Yitzhak Shalev, that expresses a yearning for “the thorn of impoverished Canaan.” Shalev’s success in resurrecting a virgin’s bower (zalzelet in Hebrew)—like the rod of Aaron, he writes, which miraculously “brought forth buds and bloomed blossoms”—leads him to a short story by S. Yizhar, based on a naturalist in Jerusalem who taught both Yizhar and Shalev’s father.

In forging the “new Jew,” in rejecting the exilic Luftmensch—the high-minded floating “man of air”—and rooting themselves to the solid ground of the Promised Land, the Zionist Left of Yizhar’s generation used to speak with confidence of conquering the soil (kibush ha’karka), labor (kibush ha’avoda), and even language itself (kibush ha-lashon). In the end, stepping over his garden’s ant trails, Shalev reflects on the meanings of the Hebrew root kibush—originally to tread underfoot, to subdue, to press, and to conquer; later to pave and to pickle. We do not conquer language, he concludes; if anything, language conquers us. Nor even do we conquer the land. “Hebrew conquers the land,” Shalev writes, “conquers women, conquers ways, conquers instincts, conquers a person imprisoned or enslaved, and if there is still strength, it also conquers olives.”

A new English selection of Avrom Sutskever's essential prose reveals the fascinating tension between the great Yiddish writer's Israeli present and his East European past.