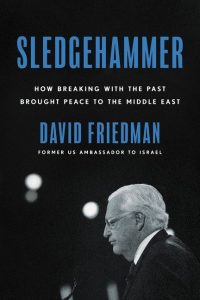 In the opening pages of Sledgehammer, David Friedman’s memoir of his nearly four years serving as the US ambassador to Israel under former President Donald Trump, Friedman explains why he chose the title. Meant to both figuratively describe his philosophical approach to the job and serve as a wink to the controversy that ensued when Friedman wielded a literal sledgehammer to unveil part of an archaeological excavation at Jerusalem’s City of David, his assessment was that American support for Israel and achieving tangible results required a blunt approach, and that “US-Israel policy could be fixed only by breaking it and allowing it to set properly.” Leaving aside the strange mixing of demolition and medical metaphors, what stands out is not Friedman’s conviction that pre-Trump policy had to be destroyed, which is not surprising given either Friedman’s or Trump’s styles and policy proclivities. Rather, it is that in a book ostensibly designed to explain how Friedman and his colleagues achieved the Abraham Accords—in Friedman’s words, “an explosion of peace”—his preferred symbol still remains one of destruction rather than one of construction. It subconsciously supports much of what follows, which is that Friedman’s true intention was to tear down rather than to build up.

There is plenty of evidence, both independent and provided by Friedman in his account, to support the conclusion that he was one of the most impactful American ambassadors to Israel across seven decades and one of the most impactful officials in the entire Trump administration. Much of that impact was enabled by the unprecedentedly chaotic nature of Trump himself and the policy process that ensued as a result, which provided leeway for various people—Friedman included—to take action without oversight and with the confidence that the determining variable for what could be done was not the merits of the policy move itself but Trump’s assessment of them personally. But Friedman’s impact also resulted from his bringing to the job an unwavering and blinding set of ideological commitments that he was unafraid to act upon. If Friedman’s book was a how-to manual for effective government service, it would be accurately titled “Triumph of the Ideologue,” a badge that Friedman thematically embraces and would undoubtedly be proud to wear.

The characterization of Friedman as an unapologetic ideological bulldozer should be viewed in one light as a signifier of admiration. There were clear benefits to Friedman’s approach of acting on conviction and without hesitation. Time and time again, Friedman outlines examples of what he viewed as diplomatic caution that were the result of inertia, ossified thinking, or what he saw as incorrect analysis. In all of these instances, his approach was to do rather than debate, with little to no concern for diplomatic or personal niceties, and he was never content to accept an outcome with which he disagreed simply because things had always been done a certain way. The unshakeable certainty and willingness to throw caution to the wind meant that Friedman was able to carry out an ambitious agenda, even in the face of internal and external opposition.

Friedman did not arrive at this approach over time, but displayed it from the outset. When a State Department official tried to prevent him from attending a Jerusalem Day ceremony with Prime Minister Benjamin Netanyahu and President Reuven Rivlin only days after his arrival in Israel by arguing that it would engender controversy and cast a pall over Trump’s upcoming visit, he responded by disagreeing that his participation would be controversial in any way and told the official to call Trump personally if he didn’t like it. Friedman brushed away similar but far louder and public concerns when it came to recognizing Jerusalem as Israel’s capital and Israeli sovereignty over the Golan Heights, closing the Jerusalem consulate, and greenlighting the possibility of unilateral Israeli annexation in the West Bank. He pushed for policies that had ranged from unlikely to unimaginable under previous presidents, and his recounting of his role in making them happen is not idle boasting. While others across the Trump administration shared Friedman’s worldview and had an affinity for the same policies, it was clear in real time that Friedman was the driver and implementer of most of them. His methods for turning his ideas into reality were as critical to his success (and perhaps more) as the ideas themselves.

But there is also little question that Friedman’s ideological approach, untroubled by any hint of self-doubt or internal questions, carried with it significant downsides despite its effectiveness. Friedman’s blustering certainty was completely impervious to facts that might contradict his prior convictions, leading to blind spots in a number of areas. Many of Friedman’s assessments were correct, which he loudly touts, yet others were not, and these are constantly glossed over, explained away, or misrepresented. He equally derides the predictions ahead of the Jerusalem recognition that there would be violence across the Middle East and that it would derail any hopes of restarting a U.S. led Israeli-Palestinian peace process; while the first was indeed off the mark, the Palestinians remain distrustful of the U.S. today even now that the administration has changed. He implausibly claims that the Hamas-led riots on the Gaza border in the run-up to the embassy opening were due to Hamas discontent not with Israel or the U.S. but with the Palestinian Authority, and that the violence on the day that the embassy in Jerusalem was inaugurated, in which sixty Palestinians were killed, “might have happened even without the embassy opening.” It is hard to see how Friedman ever considered the full range of potential ramifications of certain moves when he stubbornly refuses to acknowledge or process events after they occurred.

Friedman also has difficulty moving beyond his own strong political biases, even when they lead to jarring contradictions. In recounting the Israeli government’s decision—with Friedman’s not-so-subtle prodding—to deny entry to Congresswomen Rashida Tlaib and Ilhan Omar, Friedman unreservedly defends Israel’s right to keep out anyone it wants because it’s not “my business who Israel lets into its borders.” Yet in the very same chapter, when recounting Israel’s invitation to House of Representatives Speaker Nancy Pelosi to attend Yad Vashem’s commemoration of the 75th anniversary of the liberation of Auschwitz, Friedman details his anger that her presence would detract from that of Vice President Mike Pence, since she was responsible for Trump’s impeachment and he insists that Pelosi is “[s]omeone whose status would not merit an invitation if from another country.” The book is replete with similar convictions that only make sense through a certain partisan lens, such as describing Ha’aretz as “Far Left” and the Times of Israel as “center-left” while Breitbart is casually mentioned next to Reuters when discussing media outlets that have no qualifiers.

Where this tendency shines through the brightest is in Friedman’s discussion of the Trump plan, and in particular his support for settlement annexation. In one of the most illuminating passages, Friedman references his personal conceptual issues, as he refers to them, surrounding any peace plan that the U.S. would construct, which included that Israel not cede any territory and that no settlement be evacuated. Despite repeatedly taking others to task for intimating that the U.S. or American Jews might have opinions on how Israel runs its affairs that should be heeded, Friedman had his own opinions—ones that belied actions that previous Israeli governments had actually taken—that he imposed while constructing a plan for how Israel should run its affairs. This does not make what Friedman did illegitimate or wrong, but does expose a core fallacy that characterizes much of his narrative, which is that his view of Israel and the Palestinians is more legitimate than contrary ones.

Friedman’s attachment to the West Bank and embrace of annexation shine through in a way that illuminates another point, which is that he still regrets the way the annexation debate played out, where it resulted in his preferred approach being shelved and the Abraham Accords coming together as a direct consequence. Friedman details his efforts to sell Benny Gantz on annexation while he was opposition leader during the second and third election cycles; his suggestion of trading a recognition of immediate Israeli sovereignty over 30 percent of the West Bank for an Israeli commitment to then negotiate in good faith with the Palestinians for four years; his favorable reaction to Netanyahu’s emphasis on West Bank sovereignty rather than peace during the Trump plan rollout because of his own self-described strong advocacy for annexation; his dismay that right-wing Israeli leaders took self-defeating actions that made it more difficult for annexation to gain traction; and finally his disappointment that the Abraham Accords meant delaying Israel’s declaration of sovereignty over parts of the West Bank. Friedman offers the right paeans to regional peace and its importance, but it was not what he was actually working towards. It was an accidental byproduct of his real passion, which was to use U.S. action to transform the Israeli-Palestinian dynamic into one where any hope for a future two-state outcome would be permanently shattered.

Along the way, Friedman’s account also contains clumsy conflations of things that are not quite the same. When he discusses settlements, he jumps back and forth between talking about supporting Jewish civilian communities in the West Bank and IDF security control of the West Bank, acting as if these two things are identical and that the latter depends on the former, perhaps counting on his readers not to notice the sleight of hand. He compares American troops stationed in Germany, Japan, and Korea with Israeli troops that he believes need to be stationed permanently in Palestinian territory and professes to see no difference in these situations, conveniently ignoring that American troops are in these states at the invitation of their hosts, while IDF troops operating in Palestinian territory or a future Palestinian state are and would be far less welcome. While few would argue that the U.S. and Israel share many interests and values, the lengths to which Friedman goes in insisting that ancient Israeli archeological sites should be viewed as American heritage sites are maladroit.

Yet none of these things distracts from the main lesson of Friedman’s missive, which is that a highly motivated and highly ideological individual can affect enormous change under the right conditions, provided that the individual is willing to discard any previous norms or rules of the game for the sake of ruthless efficiency. Friedman is obviously and understandably proud of his record, but a future David Friedman who has a very different worldview may absorb Friedman’s lesson in carrying out a very different set of policies. Friedman himself may wonder then whether introducing a sledgehammer to the intricate world of Israeli-Palestinian affairs and related U.S. policy ended up being the smart move in the long term.

*David Friedman, Sledgehammer: How Breaking with the Past Brought Peace to the Middle East, HarperAcademic, 2022, pp. 272.