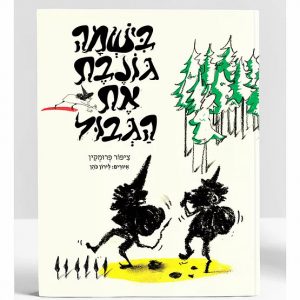 “What, can it be that someone…someone has made the border disappear? How? Alfahoresh still didn’t answer him. “But it’s good, no?” Rachmaninoff continued, his tail scratching his head. “If there’s no border, then can we simply cross easily from side to side?” “Don’t be stupid,” Alfahoresh berated him. “To cross easily from side to side,” he mocked. “What? Are you stupid? If there’s no border, then there’s no value to what we’ve successfully escaped from. There’s no point in escaping!” (Tzipor Frumkin, Bishma Steals the Border)

Borders divide the world into two: good and bad, boys and girls, children and adults, who is with us and who is against us, “us” and “them.” There are those who like borders, order, laws and instructions, and there are those who do not. Whether it protects us from ourselves (so we don’t go too far, so we don’t lose our way, so we know how to behave and how to live within the boundaries of good taste); whether it protects us from others; there is no doubt about the necessity of the border for the conformist. Now, though, it becomes clear that, for those on the margins of society, the border is also necessary, even if it serves a different purpose.

In children’s literature, boundaries are taken for granted, as everyone knows that children need a fixed routine and a clear allocation of roles in order to feel secure and stable. At the same time, it’s clear that strict rules and overbearing restrictions are likely to ruin the reader’s pleasure, feeding into a didactic story lacking in imagination and interest. During the state-building period, Hebrew children’s literature was mobilized for the sake of the Zionist project. The leading writers sought to shape children in light of Zionist ideology. Most of the children’s books written during this period had a didactic-conservative element, but there were others, lyrical and universal, by Leah Goldberg, Miriam Yellin-Steklis, Avraham Shlonsky, and Natan Alterman, written precisely at the height of this ideological era. In the 1970s and 1980s ideology finally departed the children’s bookshelves and was replaced by personal-universal themes which shaped the character of the Israeli child according to the Western liberal model. Take, for example, the books which Meir Shalev wrote with Yossi Abulafia during the 1990s (and have since become classics), which laughed openly and unapologetically about the family unit and the Israeli way of life through a description of adults smoking, insulting one another, being scantily clad and even making out with one another – today these books would be unanimously rejected as being unsuitable for children. The contemporary obsession with the question of “what’s suitable for children” has led authors to keep quiet, because on the one hand they need to give adequate representation to everyone, and on the other hand they have to avoid dealing with dark, painful or complicated aspects of childhood. Luckily, there are still some brave authors who refuse to align with political dictates and create “different” texts (mostly produced by small publishers) with a bold and different take on our world.

Thus, for example, Rachmaninoff and Alfahoresh, the heroes of Bishma Steals the Border, by Tzipor Frumkin (illustrations by Liron Cohen), are a pair of smuggler sprites, who steal the border because it gives them identity and status, and also—how can we put it?—provides them with “honor.” What does that mean? Firstly, that we are all on the same side; and secondly, that the border, imaginary or real, whether it separates or regulates, divides or defines, is designed to be crossed—or at least blurred or, according to the need, hidden. And that’s exactly what Tzipor Frumkin does in her new children’s book. Bishma, the little witch from Kings’ Meal, which was published in 2019, returns in the sequel (the second in the ‘Bish Series’) for another wild, unrealistic, and funny-to-the-point-of-tears adventure. If in the first book Frumkin created a heroine who was the female equivalent of Robin Hood (even when Robin Hood crossed a moral boundary or two, it was always for a higher cause), this time the heroine is a post-modern Forrest Gump: somewhere on the autistic spectrum, clumsy and naïve, with a pure heart. And if sometimes her careless behavior ends in tears, at the end of the day she does good in the world, filling her soul with hope and optimism.

The story begins where the previous book ended. At the end of the meal, during which the witches are served the cruel and stupid kings that Bishma had caught in her bag, she arrives at a dodgy inn, seeking alchohol. While sipping her drink, she eavesdrops on a couple of leprechauns speaking about stealing the border. She decides to join them, and things begin to get complicated after Bishma, who interprets their intentions literally, sets out (together with her broom and her sack) to actually steal the border.

The witch succeeds in stealing the border that separates the two warring kingdoms, and hides it inside her sack. Her plan is to sell it at an inflated price (to the same two kingdoms) in order to enrich herself. But things get complicated: firstly, when she is betrayed and captured; and then when she discovers that the neighbors prefer to live in peace, causing her moneymaking schemes to unravel. Aside from this, there is another plot twist when the witches’ leader’s hammer is swallowed by the mountain—and at the same time all the witches disappear, apart from Bishma, who turns into a small black cat. In short, there’s plenty going on.

With the expertise of a magician, Frumkin crosses every possible boundary in 200 pages saturated with unbridled humor and wild imagination, emphasizing the absence of the didactic aspect. Frumkin continues to depict notions of fluid sexuality, this time from a male point of view. In the first book, it became clear that Bishma didn’t have a clear sexual preference; this time, we’re talking about her ageing and grumpy broom that comes out of the closet and transforms into a broom with pink feathers, a dancer, and a gossipmonger (and extremely confused by everything that happens to it). If the theme of sexual fluidity seems like a kick in the holy of holies of children’s literature, then the old witches’ smoking ceremony is the last nail in the coffin of pedagogy. A moment before she transforms into a dragon and vanishes from the world, the head of the tribe of witches burns her carpet in an impressive ceremony that incorporates the smoking of mind-altering drugs, delusions of time travel, reincarnation, and a strong feeling of euphoria—in short, everything that would accompany an Ayahuasca shamanic ceremony.

Stylistically, the book crosses boundaries of its own, by constantly disrupting the laws of language. Frumkin invents word games, coins new phrases, swaps consonants, and isn’t afraid of laughing at anything that would be considered standard, proper, or restrained. The violations of the laws of language, which can be viewed as a particular disadvantage in children’s literature, is revealed here to be a positive; not only for turning the reader’s attention to the wonders of the language, but also because she provides a different voice, feminine and muted, which is rarely heard. This voice, as the author says, is a “small sun that usually scatters its light far into the depths of the night.” Now, this voice finally emerges from its lair.

This moment when the borders are abolished expresses another important issue. It also abolishes binary thinking, which over the years has come to define the self by rejecting the other, by creating concrete walls and barbed wire fences, by rejecting the humanity of everything that doesn’t conform to the heteronormative norm, and by dictating what’s right and true and what’s wrong and false. In this regard, the colorful fantasy concocted here—mixing the actual and the metaphorical, uniting witches, sprites, animals, humans, and objects—provides a golden opportunity to reject a conservative and colonialist body of children’s literature, founded on the boundaries of hierarchy. It provides an opportunity to look at things from a slightly different angle, freer and less male. The only boundary that Frumkin does preserve—and strictly—is the border of “and you shall love your neighbor as yourself.” This is the boundary which sets Bishma on her journey of justice in the first book, which flooded her with feelings of guilt and failure after she exterminated (by mistake of course) the community of witches (whom she mourns).

Frumkin’s trippy journey of adventures invites the reader on a crazy and funny sensory journey, somewhat akin to a ride on a ghost train at 200 kilometers an hour. Sexual fluidity, mind-altering drugs, reincarnation, a palace that’s a jail, and a reality that’s a metaphor: all are part of the boundary-crossing repertoire that expresses explicit striving under the authority and creation of another world. Will this be a free and happy world, or chaotic, violent, and scary? It’s too early to say. What’s for sure is that there will be another sequel.

Translated from the Hebrew by Alex Stein.