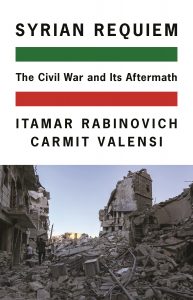 The Syrian Civil War is the most cataclysmic event to have taken place in the Levant in the last 70 years. The numbers, in themselves, are astonishing. Around half a million dead. 12 million made homeless. Damage to infrastructure amounting to perhaps $300 billion. Nor are the effects of the war limited to Syria itself. The waves of refugees seeking passage to Europe have served to transform the continent’s European politics, helping the rise of populist parties in a number of countries and contributing to Britain’s exit from the European Union. The war has also had geo-strategic effects of profound importance. It has prompted Russia’s return to the eastern Mediterranean, where it is arguably the most consequential power at the present time. Turkey, meanwhile, has established what amounts to a protectorate in an area of northern Syria where three million Syrians reside. The “original” war has produced a series of sub-conflicts: an ongoing Israeli air campaign against Iranian targets in Syria, war between Turkey and the PKK in Syria, and of course the ongoing fight against Islamic State.

The Syrian war has also, already, produced an abundant literature of its own. It was clear from its outset that the events taking place were of profound and historic importance. Book-length treatments began to appear within the first year of the uprising against the Assad regime. The Syrian war, however, has proven to be a moving target. By the beginning of 2012, the civilian demonstrations that characterized its first phase (and that were celebrated in a number of hastily produced volumes) were transitioning into an armed struggle between the regime and an insurgency raised against it. The emergence of ISIS, the rise of Kurdish power, and the Russian, Iranian, Turkish, and Western interventions brought further change.

By 2019, however, a fuller trajectory to events began to become apparent. Many of the early, impressionistic attempts to capture the essence of what was going on had already become irrelevant. A more weighty body of literature, seeking to locate the war in the context of Syrian and regional history and strategy, has now begun to emerge. Syrian Requiem: The Civil War and its Aftermath is the latest addition to this more considered literature; not composed in the white heat of the daily events, but rather seeking to delve into the deeper implications behind them.

Syrian Requiem is also the first significant Israeli addition to this literature to appear in English. The book’s tone is cool and scholarly, as seems appropriate for its focus on diplomatic and strategic issues. The atrocities identified and described in detail by Sam Dagher in Assad or we Burn the Country, and by Rania Abouzeid in No Turning Back: Life, Loss and Hope in Wartime Syria are not to be found here. Exhaustive descriptions of the situation on the front lines are also absent. This book has no pretensions toward providing either a military history, a literary evocation, or an exhaustive historical study of the war. Rather, it is a spare and concise volume concerned with an early mapping of diplomatic processes, and the strategic and policy implications of the conflict.

The authors are well placed to provide such an account. Itamar Rabinovich, a veteran scholar of the Middle East, was Israel’s chief negotiator with Syria between 1993 and 1996, and served as Israel’s ambassador to the US during the same period. Syrian Requiem is his third book focusing specifically on Syria. Carmit Valensi is one of the most prolific, independent-minded and active of the younger Israeli scholars working on Syria. She manages the Syria research program at the Institute for National Security Studies (INSS), a leading Israeli national security think tank in Israel where she is also a research fellow.

Syrian Requiem usefully begins by locating the events of 2011–19 within the broader sweep of Syrian history. Because of the long period of stifling and repressive stability from 1970 on, commencing with the accession of President Hafez al-Assad, it is easily forgotten that in the first quarter century of its existence, the modern state of Syria was characterized by ideological conflict, external interference, and chronic governmental instability. The authors note the inbuilt “shaky foundations” of the Assad regimes, and their immediate forerunner—the “Neo-Ba’athist” regime of Salah Jadid and Assad, which came to power in 1966; the shaky foundations being the very narrow sectarian core base of support which has characterized these regimes. This “more distinctive sectarian character and a much narrower base of support,” because of the Alawi identity of the new leaders and those around them, contrasted with the channels of communication maintained with Sunni elites by the first Ba’ath regime (1963–66).

The authors do not, however, assert a simplified, purely sectarian reading of the causes for the outbreak of the uprising in 2011. They note that Hafez Assad was able to build a “stable regime based on primordial loyalty,” and that over time the stability he created even enabled the creation of (less intense) support from a “broad strata” of the population. The maintenance of balance in this complex structure, however, depended on the “extraordinary skills” of the man who had created it.

His son, as this book demonstrates, clearly lacks the required skills. Still, the authors note the “resilience and ruthlessness” which are among the factors that have enabled Bashar Assad, despite the catastrophe of recent years, to retain his position as Syria’s dictator. Syrian Requiem skillfully traces Bashar Assad’s erratic early years as president: his hesitant gestures toward reform in the short-lived “Damascus Spring” of 2000, early flailing response to the uprising, and then, from mid–2011, his determination to crush resistance to his rule by force—a goal which, despite the many twists and turns along the way, has largely been achieved.

Rabinovich and Valensi are unsparing in their depiction of the fractured and hapless nature of the leadership—or leaderships—of the uprising. In their analysis, towards the end of the book, of the reasons for the Assad regime’s survival, they place the “weakness and divisiveness” of the opposition high on the list.

The Syrian non-jihadi uprising is indeed unusual in the history of insurgencies, in that it has failed to produce a single leader, political or military, of the first rank. This is in contrast to the brutal Salafi jihadi organizations that emerged in the course of the conflict. ISIS and Jabhat al-Nusra succeeded in coalescing around leaders—in the persons of the late Abu Bakr al Baghdadi and Abu Mohammed al-Jolani, respectively—who, whatever one thinks of their political philosophies, were (or are, in al-Jolani’s case) leaders of considerable charisma and organizational ability. The role of General Mazlum Abdi of the YPG among the Kurds is similar testament to the principle of “cometh the hour, cometh the man.” The Syrian uprising, despite the presence of capable figures noted in the book, such as Ahmed Jarba and Ahmed Muaz al-Khatib, produced no such leader.

The authors equally train their analytical focus on the crucial international element of the civil war. The erratic, hesitant nature of US policy is examined in detail. The decisions by President Obama to oppose proposals for the arming of the Free Syrian Army in 2012, and then the failure to enforce his own declared red line regarding the regime’s use of chemical weapons in 2013, are identified fairly as central factors determining the outcome of the war.

The volatile, chaotic nature of the Trump presidency, including its stances on Syria, does not escape scrutiny either. The authors wisely avoid excessive editorializing in their depiction of Trump’s decision, in both 2018 and 2019, to order the withdrawal of US forces from eastern Syria, only to subsequently reverse course. Recitation of the bare facts is sufficient. Efforts by the Gulf states to resolve the conflict, and the subsequent squabbling and disunity between them, are also treated in detail. The book also presents a brief but useful examination of claims of cooperation between Islamic State and the government of Turkey.

By contrast, the authors note the single-minded and coordinated (at least as much as deemed necessary to ensure success) nature of the Russian and Iranian interventions on behalf of the Assad regime. This “effective support” is listed as an additional factor in explaining the survival of Bashar Assad’s regime. Nevertheless, Rabinovich and Valensi note that the regime’s victory remains “far from complete.” Ironically, Russia and Iran now constitute major barriers to the regime’s return to full sovereignty, due to their continued presence and extensive ambitions and projects in Syria. The incompleteness of the victory, of course, is also illustrated in the absence of even nominal regime sovereignty over large parts of Syria, with extensive US/Kurdish and Islamist/Turkish sectors outside Assad’s control.

Syrian Requiem is a well-written, concise, and yet comprehensive account of the Syrian war. The authors conclude that while the active phase of the war may largely be done, an “enduring crisis” remains. One minor absence, in my view, is that there is no discussion of Iranian influence on the official structures of the Syrian security forces—through close cooperation between the Qods Forces and such bodies as the 4th Division and Air Force Intelligence, alongside the influence wielded by the Russians, which is presented here. The book could possibly also have benefitted from an additional read-through. On page 60, Abu Bakr al Baghdadi is described as the “al-Nusrah leader”; and did Sudan’s President Omar al-Bashir really fly to Syria in December 2018 on a “Soviet” plane (Soviet-era, perhaps)?

These are minor issues. Syrian Requiem is an original and valuable addition to the literature on the Syrian civil war, and is likely to become one of the early standard texts on this subject, specifically with regard to its cogent examination of the diplomatic, strategic, and high policy elements of the war’s trajectory.

A new book argues for the historic significance of the Arab Spring. Does it succeed?