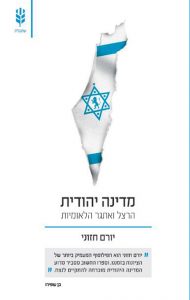 Published in Hebrew in 2020, The Jewish State: Herzl and the Promise of Nationalism is a rehash of Yoram Hazony’s two-decades old writings on Theodor Herzl. The first two chapters, on Herzl’s thought and political life are translated, almost verbatim, from Hazony’s 2000 book in English, The Jewish State: The Struggle for Israel’s Soul (the Hebrew translation is uncredited). The third chapter, on the meaning of “the Jewish State” for Herzl, closely follows his 2000/2001 article in the journal Azure/Tchelet. One would expect disclosure of these facts, and an explanation as to why Hazony chose to make this material available to Hebrew readers twenty years after it was originally published. But such disclosure is not to be found here. The original English edition, from which the bulk of the 2020 text is taken, receives a single cryptic reference without further explanation (footnote 36). This is the first indication of the intellectual dishonesty which characterizes much of the book.

The original texts were published in 2000, just before the failed Camp David talks and the Second Intifada. Hazony’s polemic on Herzl’s legacy was part of a larger tumultuous debate on the future of Israel: between those who hoped to use the peace process to push for a more civic Israel, and those like Hazony, who sought to defend and deepen Israel’s character as an exclusively Jewish state. The debate centered around the rights of Israel’s Palestinian citizens (one fifth of the population of the State of Israel) and the future of Palestinians in the Occupied Territories (a third of the total population under Israeli rule). It was a debate that involved, quite obviously, Palestinians—but Hazony does not quote any Palestinians, and indeed none are even mentioned. Readers unfamiliar with Israel/Palestine would not guess, from reading Hazony’s book, that in Herzl’s times Arab Palestinians constituted the vast majority of Palestine’s population , and that Palestinians make up about 50 percent of the population under Israeli rule today. In this erasure, the book mirrors Israel’s Nation State Law (2018), in which Palestinians are entirely absent. Once more, they have become what, in 1905, the early Zionist activist Yitzhaq Epstein famously called “Zionism’s hidden question.”

Hazony’s 2000 book was published months before the Oslo peace process was irrecoverably derailed. Since then, the debate within Israeli has been decided in favor of Hazony’s political camp. What was then a live, contentious, high-stake ideological battle is now mainly an opportunity for Hazony to celebrate his triumph. That triumph perhaps explains why Hazony does not bother to engage here with any of the inconvenient critiques made since the 2000s. The book is extremely thin in this regard. It completely ignores recent academic literature on Herzl, such as Avi Sagi and Yedidya Stern’s edited volume Herzl Then and Now: “The Jewish State” in the State of the Jews—which examined Herzl’s ideas in relation to the reality of Israel. Likewise, it does not engage with Dmitry Shumksy’s groundbreaking Beyond the Nation State, in which he compellingly locates Herzl’s political vision in the imperial, multinational context of the late nineteenth century—arguing that Herzl’s Jewish State was not the nation state that was established in 1948, but rather a blueprint for a pluralistic European autonomy of Jews in the Ottoman Levant.

Over the last decade, Hazony has evolved from a conservative Jewish thinker to a global hard-right philosopher. In 2018, he published the bestseller The Virtues of Nationalism, which turned him into an intellectual superstar of the global populist right, admired by the Trump administration and by populist leaders such as Hungarian Prime Minister Victor Orban (who is tolerant of antisemitism).

The main addition to this Hebrew edition is the introduction, which frames the discussion of Herzl within the simplistic narrative of world history that Hazony developed in The Virtues of Nationalism. This is the story of a Promethean struggle between bad empires and good nations. Imperialism, claims Hazony, aspires to bring peace by uniting humanity under a single political regime; nationalists, for their part, believe that the world is best run when nations zealously guard their individual paths according to their particularistic interests and traditions . This rigid dichotomy makes little sense when we examine Hazony’s concepts of nationalism and imperialism; his attempt to force that logic onto Herzl is particularly awkward.

What is a nation? Hazony’s language is deliberately ethnic and anti-civic: a union of tribes marked by the “shared heritage” of “a common language or religious tradition” and a history of joining together against common enemies. Hazony denies that his concept is racial, in the biological sense, and he stresses that the commonality can be open and inclusive of outsiders beyond the core group. In the case of Jewish nationhood, he posits (repeatedly), the common denominator is religion. But how is it possible to compare a commonality based on language—an acquired skill—to one based on religion? How can a religion-based community be anything but exclusive ? And where does it place secular Jews? In 2016, 45% of Israeli Jews were secular; the 2021 Pew survey in the United States showed that 53 percent of Jews believe their Jewish identity is about “Ancestry and/or Culture,” not religion. Hazony accepts the idea that some nations, such as Switzerland, are territorial, yet seems to deny the possibility of Jews being a part of such nations. The implicit conclusion of the book is that Jews never belonged and can never belong to other nations. Hazony tells the history of emancipation as the story of the conversion of Jews from “their nation” to European nations—a conversion that could not succeed. Against this Jewish liberal revolution, Hazony is keen to present Herzl as a reactionary, “the greatest counter-revolutionary that European Jewry has ever known.” Other scholars have called Herzl reactionary before, but never as a compliment.

Hazony’s concept of Empire is ill-defined, and it seems to include any multi-national framework: from the Roman Empire to modern European empires such as the Austro-Hungarian and Russian empires, colonial empires (Britain and France), as well as the Nazi Third Reich, the European Union, and the United Nations. This is a rather meaningless grouping of different political frameworks, each with different ideas of citizenship, the role of race and ethnicity, the nature of political hierarchy, democracy, and the configuration, conceptualization and powers of the state. The only value of such a grouping is that it creates a foil, against which the right order of “nation states” is re-emerging, according to Hazony: Trump’s America, Brexit, and right-wing governments in Hungary, Poland, Brazil, India and, indeed, today’s Israel. In the words of Hazony, global nationalist movements now look up to Israel as “an exemplary state and a role model.”

It is particularly problematic to cast Herzl as an anti-imperialist nationalist, given that his entire diplomatic effort was to position Zionism within a global imperial framework. Herzl’s vision for the Jewish State in Altneuland was for autonomy under Imperial (Ottoman) patronage. But it is not only a question of political regime. As Dmitry Shumsky has recently demonstrated, Herzl believed strongly in embracing European culture—including in its choice of official languages (preferably German, and certainly not Hebrew or Yiddish). This preference was ideological, not pragmatic: as Herzl noted in his diaries, a state based on Hebrew-language would be a “ghetto ,” while one based on a European language would ensure wider connections, as part of an Imperial world order.

Hazony portrays Herzl as a born-again Jew, awakened by antisemitism but primarily driven by a deep commitment to the Jewish nation as defined by religion. This will no doubt surprise those who have read Herzl’s Der Judenstaadt—a book almost without any references to Jewish religion, history, or culture, beyond a token reference to the Maccabees and the Exodus. Neither the Bible nor the Talmud are mentioned there. Hazony quotes Herzl in Der Judenstaadt: “We are a people—one people”; but he chooses not to quote Herzl’s other version of that dictum in the same book, just a few pages later: “We are one people—our enemies have made us one without our consent, as repeatedly happens in history. Distress binds us together, and, thus united, we suddenly discover our strength.” As should be clear to all who have read Herzl, he believed that it was antisemitism which made Jews; racial identity or, indeed, religious heritage, were secondary considerations. Herzl’s explanation for the failure of emancipation is a distinctly materialist one, building on the role of Jews in the political economy, rather than on the force of national conviction or ethnic incompatibility.

Hazony cherry picks the rare references to anything Jewish in Herzl’s writing, and brushes aside Herzl’s custom of putting up a Christmas tree; the fact that he did not circumcise his son Hans, nor give him a Hebrew name, is not mentioned here.

Similarly unconvincing is Hazony’s notion that Herzl had a deep commitment to the Land of Israel. The fact that Herzl initially considered South America as the preferred site of the Jewish state is mentioned here only as an afterthought. Herzl eventually realized the enormous emotional resonance of Palestine for the Zionist project, but even then, he had little interest or attachment to that land. He only visited it once, in 1898, and that was in order to meet with Kaiser Wilhelm II. His diary entries from that ten-day visit show contempt for actual Palestine, its Arab population, and its Jewish communities. He detested Palestine so much that at the end of his visit, he chose to board a rickety boat in Jaffa and wait a full day before departure, rather than spend another day on land.

Hazony’s book is an apologetic and selective account, from which one cannot seriously learn much about Herzl or his political philosophy. Those who are interested in Herzl’s fascinating story should read Derek Penslar’s superb recent biography. But the book, however, does tell us something about Hazony’s vision: a world of hyper-nationalism and exclusivist ethno-states. Herzl is useful for Hazony to give this project old Zionist respectability and a Central European allure. It has little to do with the actual Herzl, and much to do with a version of exclusivist nationalism that—even after the departure of Netanyahu and Trump—is still on the ascent in many parts of the world.

In Defense of Nationalism

The Past, Present and Future of Shas

Shas, the Sephardi Ultra-Orthodox party, has been part of Israel’s ruling coalition since 1984. What’s been the secret of their success, and what does their future hold?

Zionism is rightly celebrated as a democratic movement, but the liberal element in it has often been sidelined and contested. Netanyahu's authoritarian tendencies seem to echo global trends, but in fact they tell a very local story as well.

The Prime Ministers: Chronicles of Failure

Two autobiographies, written by Israel’s only living former prime ministers, are uneven attempts to come to terms with their unremarkable legacies.

Boas Evron, who died last year aged 91, held unusual views on the nature of Jewish Nationhood, the State of Israel and its relationship with the diaspora. A new book revisits his unorthodox political thought.