In the sixteenth century, my ancestors, three brothers named Jibrin, Mahmoud and Misa’ad, left Beit Jibrin, a village in southern Palestine, for the north. A family member had murdered someone (we don’t know who), and as was usual at the time, sought refuge in a far-away community. They eventually settled over 100 kilometers to the north in the valley of Aara, Wadi Ara, near the village of Umm al-Fahm. The village was then inhabited by the Christian Al-Hadad family; the Muslim Al-Abasi family, whose descendants live in the city to this day; and a family of Samaritans.

According to local lore, the Samaritans regularly threatened the other families with black magic—a longstanding accusation against Samaritans that one still occasionally hears today—if they refused to hand over some of their annual produce. The Al-Hadads and Al-Abasis, having heard about the arrival of the Jibrins, who had already proved themselves capable of murder, asked for the newcomers’ help. In exchange, they offered the Jibrins half their combined territory – both on the mountain where Umm al-Fahm stands today and their agricultural lands near Megiddo and Ramot Menashe. Having sealed the deal, the two conniving families then invited the Samaritans to a feast. When the Samaritans finished eating and went outside to wash their hands, three Jibrin brothers pounced. Nineteen men were killed one by one (all the sources tell us is that this was done as quietly as possible). Another fled to a nearby spring where his pursuers caught him; today the place is known as the “Spring of the 20th.” These events are described in Wajdi Hassan Amil’s Umm el-Fahm and the Legion: A Journey through Time.

The village was once surrounded by oak trees which were cut down to produce coal—in fact, the name of the city means ‘mother of coal’—in the process clearing land for agriculture and housing. Small houses were scattered far from the city, close to the lands and forests where the men worked, so they had somewhere to live during the week. The forests were to the west and south, where the villages of Wadi Ara are today, and the farmlands were to the north and east, in the areas known in Hebrew as the Plains of Manasseh and the Jezreel Valley, and in Arabic as Sahel Ziri’in, the “Plains of the Planters.” After the 1948 war, the farmers were driven off these lands and the houses remain in ruins. In my own family, some fled for the West Bank, while others stayed. Israel expropriated the lands surrounding Umm al-Fahm, but not the city itself.

My grandfather’s house was built more than 220 years ago by my great-great-grandfather, Muhammad Mari’i Yunis. It is the oldest building in the city, located on the outskirts of the old city center. These houses were strong and eco-friendly, incorporating wood, hay and clay in their construction. They also withstood the test of time. Five generations of my family lived in this house, ten to fifteen people at any given time.

The house is constructed from stone hewed out of the mountainside on which it sits, and the floor is made from natural stone. The original carved wall still stands at the site. The roof, made from the longest, straightest branches that could be found, then layered with smaller branches and covered with hay and clay, is held up by two parallel arches and the longer side of the house. The house has one door and two small windows. Holes were cut in the outside wall for pigeons, raised for food, to nest in. Next to the house was a small shed, a hoshe, to store grain, pickles, dried food and hay. A second shed was added later as a barn for farm animals. Near the house, my great-great-grandfather dug a shallow pit where he would grind olives with a large, round stone. The ground olives were then pressed to make olive oil. At the time, this was the village’s only oil mill.

Just like my grandfather’s house, before 1948 all Palestinian houses were constructed with local materials that were readily available. In the mountainous areas of Wadi Ara, the West Bank, the Galilee, Jerusalem, and Mount Carmel, houses were built from stone excavated from the mountain rock. Along the coast, in Gaza, Jaffa, Caesarea, Jisr al-Zarqa, Haifa, and Acre, houses were built using a sandstone called kurkar. Near the Sea of Galilee, they used basalt, volcanic rock.

There were three types of houses. A beit (house) was a one-story structure, like my grandfather’s house described above. An aked was a house built for the mukhtar, the head of the village. This house was sturdier, sometimes had an upper floor, and the flat roof was supported by two arches and four walls. Unlike the beit, these roofs did not need to be resealed each year. A hoshe was significantly smaller than a beit, and was often built next door. These sheds housed sheep, goats and chickens. Sometimes, slightly larger hoshe were built by poorer families so they had somewhere to live. The differences were regional and socioeconomic, not national.

Like anywhere else, a man’s house was a projection of his wealth. Wealthier people had bigger and better houses than those who had less. Larger houses had multiple rooms, often two stories, and the door was heavier and taller, with two wings and a lock. Multiple windows on each floor had shades and glass. The houses had solid roofs, flat, domed, or with shingles. But the most readily observable difference was the use of square cut stones. As commerce advanced, bricks were introduced and then imported (mostly from England). Many of these wealthy homes can still be seen today in major cities like Jerusalem or Jaffa.

Village houses accommodated the needs of the simple man, the farmers, planters, shepherds and builders. They had to be built quickly and cheaply, and as a result, houses far from the major cities had a repetitive look. Single floor, single room houses were built with imperfect stones from local quarries or simply collected nearby. The doors, without locks, were made from untreated wood, and the one or two small windows had no shades or glass.

Mosques and churches were exceptions. Rich and poor alike always gave what they could to construct their respective houses of prayer, institutions that, in turn, distributed food to those in need. These were built using the best materials and the most advanced architecture.

After 1948, new houses were built using modern technologies and materials such as cement blocks, cement and metal rods. Many of the historic houses were torn down. But my grandfather’s house is still standing.

Since the establishment of the State of Israel, Arab villages have barely expanded to accommodate a growing population, while hundreds of new Jewish localities have been established. Permission has not been granted to build even one new Arab city. As a result, people have built their houses right on top of each other. They did not realize how many cars there would be, or how little space. For the last eighty years, it has been the custom for a man to build a new house for himself and his sons once they are old enough and the firstborn is ready to marry. The ground floor is for the family patriarch and his wife, the second floor for his firstborn, the third floor for the second born, and so on. These buildings go no higher than four floors. If there are more than three sons, then two apartments are built on each floor.

Now, though, as there is almost no land remains for building, necessity has become the mother of invention. Newlyweds have begun renting homes, and the Umm al-Fahm municipality, as in other Arab cities, plans to buy abandoned houses to demolish and build rental apartments in their place, though these plans are still in their infancy.

In these photo below, we can see the old quarter. Houses are built so close together that they touch one another, spill out into the roads, and leave no space for sidewalks. Everywhere in the city one finds the same situation: cramped houses with small yards and no parking. No one is interested in keeping the streets clean. All the roofs have water tanks in case the municipal water supply is cut, as it was during the protests in October 2000. 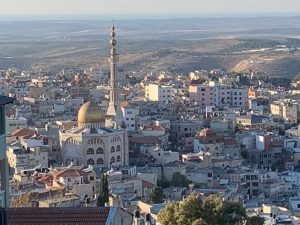 The only recent change in the city is that three new neighborhoods have been built, one to the northeast and two to the southwest. These new areas were constructed, with rarely-granted state permission, on former agricultural and government land, making up three percent of Umm al-Fahm’s territory. Because they were built on state-owned land, here, unlike in the rest of the city, people can get a mortgage, instead of a loan from the bank. The new homes are villas in eclectic styles inspired by everything from ancient Rome to the Renaissance. While they bear little resemblance to the historic buildings in the area, they do resemble the “McMansions” built by wealthy diaspora Palestinians in the West Bank. 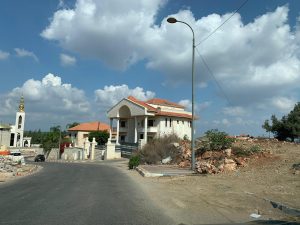 Since my grandfather passed away in 1991, his house has been abandoned. The only tangible connection I have to him and my ancestors, now it is falling into ruin. Neither the state or the Umm al-Fahm municipality is interested in preserving the building, and none of my family can help.

However, I have been making plans. A company that specializes in restoration can take on the project. The stones will have to be removed and numbered so that they can be rebuilt in the correct order, a long and arduous process but absolutely necessary. The arches will need to be reinforced from the inside, and the partially-collapsed roof and the back wall will need to be rebuilt. I will have to raise $40,000, but I am determined to restore the house and turn it into a museum and guest-house. The longer I wait, the less likely there will be anything left to preserve. Lovers of the land must come together to protect this rich, architectural heritage, or it risks being lost forever.