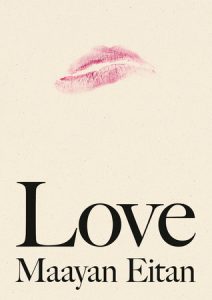 , by our co-editor Maayan Eitan, has been published in English (translation by the author) by Penguin Random House.  Set in the present in a Tel Aviv-like city, it tells the story of a young nameless prostitute, following her as she goes into strangers’ cars and gets out of them, has sex, and meets other sex workers, prostitutes and pimps. It rejects philosophical or psychological explanation systems as it asks whether “love” can exist in a world of pornography and prostitution. The author Nell Zink wrote: “Maayan Eitan is a pensive rebel seductress and a literary trickster. Love, her debut, is celebrated by various deans and kingmakers of Israeli letters as one of the new century’s most important books. Her prose-poem account of life as an underage whore is so emotionally persuasive, so transparently metaphorical, so startlingly concrete, so obviously not true, that it had everyone in Israel convinced it was straight-up autofiction.”

You didn’t have any friends

You had a terrific laughter. You had long legs, big tits, flat belly. No, you were fat. You came from ruined homes, well-off families, your parents were madly in love with each other. Your father was an accountant, a kibbutz member, homeless, a linguistics professor at a university. He loved you like his youngest daughter. You were an only child. You were born to a large family, after years of treatments, you were adopted. Immigrated from Ethiopia. You were good at math, you majored in accounting. Hebrew literature. Kinesiology. You wanted to work with children, become lawyers, your mother was a drug addict (sobered up without help), your uncle was a doctor. No, he was in jail, for attempted murder. You were blonde, in summer the ends of your hair were bleached white. No; your hair was as black as a raven, and curly. You were born in St. Petersburg. No no: your parents came from America, you were born in the suburbs, you replied to them in Hebrew when they talked to you in a jumble of foreign languages. You spoke Russian until you were seven then you forgot it, the snow too. You knew no other language but Hebrew. You refused to answer your grandparents when they spoke Amharic to you. You pretended not to understand them. Your father, the accountant, raped you in his office. Your grandmother kept the key from the ‘48 war. You were the good granddaughter, the prettiest girl in school, you had eyes that turned violet when you were angry, that you made sure to close on your first kiss. You had sex. You never came. No! You came every single time. You hated swallowing but did it anyway. You liked it so much you stopped in the middle to run to the bathroom and stick your fingers down your throat just so you could taste him again. You spat. Two months later you jumped off a high-rise. You were admitted to a psychiatric unit. You arrived at the ER with low electrolytes and acute liver failure, but they pulled you back right from the edge. Lucky you. You spent a week in the ICU, then returned. Now you had money. You bought nice clothes. Toys for your nephews and nieces. Sponges so you could work through the month, without stopping. When you ran into each other in the car – someone getting in, someone out – you didn’t smile. You laughed. Your laughter was so loud that your neighbors got sick of it. You pretended to moan while you wept miserably. You wept miserably. When you returned home and removed the makeup from your face it blended with tears of happiness. When you went out with your childhood friends you ordered cheap drinks, then more expensive. You didn’t have any friends. You had a boyfriend who was a computer programmer and you worked only when he was on reserve service, or abroad for work, and you talked of getting pregnant but you were on the pill and didn’t tell him. You liked women. You liked men. A lot. You didn’t like anybody. You were pretty, you had normal skin, freckles, chapped lips and you clipped your nails until your fingers bled because you were afraid that you might hurt someone. You didn’t want to hurt anyone. You wanted to kill them all, you wanted to shout, one time you screamed. But it was a mistake and you did not repeat it. You kept your mouth shut. You had sex in public restrooms, dance clubs, on the steps of the lifeguard tower on the beach, in a luxury apartment hotel, in your own bed. You got in the car that waited for you in the evenings with the same ease that you got out of it in the morning. What did you have to lose? You didn’t have anything.

Men looked at me