Intoxicating Zion: A Social History of Hashish in Mandatory Palestine and Israel 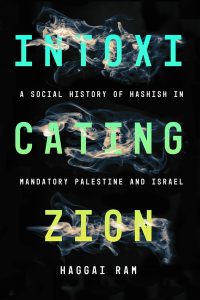 is the first book to tell the story of hashish in Mandatory Palestine and Israel. During this period, Palestine became the most important hashish waystation in the region and a thriving market for consumption. By the 1960s, the drug trade had become a major point of contention in the Arab-Israeli conflict, and drug use became widespread. In the following excerpt, taken from the conclusion, Haggai Ram accounts for cannabis’s popularity in Israel-Palestine. If you’re interested in learning more about the book, we’ll be interviewing Haggai in a special Zoom event on January 27th. You can find all the details here.

Arguing the case for the legalization of recreational cannabis in Israel, a recent op-ed in the liberal daily Ha-Aretz described the country’s Jewish citizens as “a nation of stoners.” Titled “What Really Unites Israel’s Right, Left and Center,” the op-ed stated its case thus:

“A love of pot smoking is shared among all populations in Israel. Hilltop settler youth and Tel Aviv radicals, young and old, Knesset members and simple folk, city and country people, religious and secular, everyone loves pot. Marijuana and hashish are the largest common denominator in Israeli society…. Despite the common ideals held by hippies, in Israel it turns out that one can be a religious fanatic, a human rights–trampling racist, or a warmongering militarist, and still be incredibly good at rolling joints. No problem. Pot couldn’t be any more common in Israel. There aren’t enough lungs.”

This description of Jewish Israel as “a nation of stoners” is surely an overstatement. However, a 2017 survey conducted by the Israel Anti-Drug Authority validates the general impression, backing it up with hard numbers. The survey found a dramatic surge in the prevalence of cannabis use by Israelis, Jews and non-Jews alike. Twenty-seven percent of the adult population reported using cannabis in the past year, in comparison to just under 9 percent in 2009. A comparison with surveys conducted in other countries shows that Israel is probably at the top of cannabis use by adult populations, Iceland and the US lagging behind at 18 and 16 percent respectively. In addition, during the same years, the number of medical cannabis licenses granted in Israel increased more than tenfold, from less than 2,000 in 2009 to 28,000 in 2017.

As I have demonstrated in this book, the love of cannabis in Palestine-Israel, among non-Jews and certainly among Jews, is a relatively recent phenomenon. The rise in the recreational use of hashish in Palestine was directly linked to the creation of the trans-Levant hashish trade in the interwar years. There is no doubt that the international legal structures prohibiting and/or regulating drugs in the interwar period, particularly those deployed by the League of Nations, enjoyed “small successes.” For the most part, however, these structures proved to be no match for illicit drug flows between states. On the contrary, “international drug diplomacy did little more than to push the drug trade to new markets, prompting traffickers and distributors to search for new sources and consequently catalyzing an evolution in the … illicit drug trade….” Smugglers moved swiftly across established and incipient political borders to exploit weak points in international law enforcement systems, ensuring that the loss of one drug source would quickly be replaced by another. In a recent study of trafficking across the Arabian Sea from the 1860s to the 1950s, Johan Mathew suggests, “Trafficking, in particular, confounds the desire for a smooth narrative. The opportunistic quality of traffics lends simultaneously erratic and repetitive rhythm to … events…. New laws were met with new methods of evasion, which elicited even stronger laws and more ingenious evasions. The cycle repeated itself ad nauseam.” In the setting explored in this book, the disruption of Egypt-bound hashish supplies from Greece was offset by supplies to the same destination from Lebanon and Syria, ensuring that the Levant in general and Palestine in particular (i.e., weak points in the international drug control system) would become new theaters for extensive border-crossing hashish smuggling operations.

Paul Gootenberg suggests that the movement of drugs from their place of origin to their place of destination was born autonomously of political borders; with those borders becoming a “a nuisance” and “an obstacle course,” they were destined to be overcome by imaginative smuggling operations. Little wonder, then, that with the establishment of the State of Israel in 1948 and the delineation of the new state’s borders, smuggling operations across the Levant, from Lebanon in the north and into Egypt in the south, continued with a vengeance. Hence, after certain adjustments necessitated by border and demographic changes, the territory now ruled by Israel remained an arena for hashish flows to Egypt from Lebanon. What is more, due to the absence of diplomatic relations after 1948 between the State of Israel and its Arab neighbors, coupled with the rising tensions and animosities between them, the Levant evolved into an even weaker point in the system of international drug control than it had been in the preceding interwar period. As a result, additional players joined hashish smuggling operations, including Jews and—allegedly—the Israeli army as well.

As we have seen in this book, Palestine’s emergence as a new junction and the most important way station for hashish in the interwar Levant contributed to a significant increase in hashish smoking among the territory’s urban working-class Arab population, the British in Palestine lacking the ability and will to enforce the prohibition of the drug. With few exceptions, the nascent Jewish community of interwar Palestine avoided hashish smoking, due to the fear of accommodating an Oriental, “alien” artifact; a similar discourse, framing marijuana as an “alien” Mexican and black substance was also common in the United States of the era. Orientalist stereotypes and interwar colonial knowledge exacerbated the Jewish aversion to hashish, as this knowledge had taught Jews that hashish’s unique forms of intoxication were racially compatible with the putative deficiencies and pathologies that were an inherent aspect of the Arab mentality—insanity, violence, criminality, hypersexuality, homosexuality, indolence, and manipulability.

Just as hashish flows to Egypt survived the transition from mandatory Palestine to the State of Israel, so too did interwar colonial knowledge about cannabis, albeit by responding to new demographic realities: the country’s loss of its Arab population, and its repopulation by Jews from the Muslim world (Mizrahim), who in the years 1948 to 1967 were identified as the main consumers of the drug. Even though hashish smoking in Israel remained limited to no more than a few thousand Mizrahim during this period, it rekindled the dominant Ashkenazi class’s apprehension of the Levantinization-cum-Arabicization of the Jewish state. In parallel, this conceptualization served to exacerbate the marginalization and criminalization of Mizrahim in Israeli society.

The normalization of recreational cannabis use in Israel has been building up a head of steam in recent years, as old mythologies about the substance evaporate. Yet remnants of obsolete Oriental fantasies about the drug remain, albeit in reconfigured form. One blatant example is a thirty-three-second video clip prepared by the Israel Anti-Drug Authority in 2006. Designed to dissuade teenagers from using drugs, particularly cannabis, and broadcast on Israel’s main public television channel, the clip was produced in the style of the dilettantish “last will and testament” videos recorded by Muslim suicide bombers. It shows a teenage boy wielding his bong like a deadly weapon, standing in front of an unsteady camera and reciting the following monologue:

I, Omer Kandel, aged sixteen, of Raanana, bid goodbye today to my parents Ronit and Shmuel, and to my sister Keren, and am going to a party in Tel Aviv. There’s only one way to be truly liberated: to get drunk, take drugs, and get really stoned. Don’t cry, mom. I’m going to paradise.

It is easy to see in this short clip echoes of the medieval Assassins myth, dressed in twenty-first century anti-Muslim garb. At the time of the clip’s broadcast—during the final days of the al-Aqsa or Second Intifada, and at the height of President George W. Bush’s global War on Terror—the suicide bomber had in the United States, Western Europe, and Israel become emblematic of the so-called Islamic death culture. The clip deliberately played on the strings of the anti-Muslim sentiments rampant in Israeli society at the time. But at the same time, it drew upon the vocabulary of nineteenth- and early twentieth-century images of cannabis—namely, that hashish is an Oriental substance used by uncivilized Muslim Arab zealots, who champion a ritual of death rather than a ritual of life.

Of equal note is the fact that the clip’s “suicide bomber” is a good middle-class Jewish boy from the “white,” prosperous city of Raanana. In terms of his social background and his demographic and ethnic identity, Omer represented something entirely different from the traditional image of hashish consumers in Israel, reflecting contemporary establishment’s understandings that hashish had spread to all parts of Israeli society. It may be that Israelis “are a nation of stoners” after all. Or it may be that the Zionist nightmare of assimilation into the Levant, a nightmare that haunted Jews in Palestine-Israel since the 1920s, seems to have materialized—at least to the extent that cannabis consumption is concerned.

A Sentimental Stroll Down Ramban Straße

A new book attempts to capture the spirit of 'German Jerusalem': A neighborhood in the holy city that, following the rise of Nazism, became a hub of German-Jewish intelligentsia.