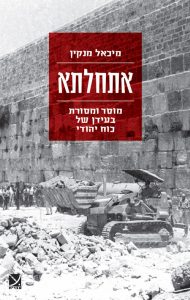 Michael Mankin’s book, The Dawn of Redemption: Ethics and Redemption in a Time of Power (currently available in Hebrew) begins with an anecdote from his army service as an officer in the Golani Brigade, together with quotations from his grandfather’s aliyah journal. This journal appears several times throughout the book, Mankin revisiting the moral and societal misgivings of his family. They had arrived from Poland as Zionists, a year after Israel was founded, only to become disenchanted with what they saw. Using a semi-philosophical internal dialogue, Mankin slowly weaves his argument that the trifecta of religion-power-ethics has led to a terrible deviation in Israel, and in Judaism, since 1948. He examines the nature, function, and development of this trifecta through changes in the communal environment of his family. We follow it as the generations pass and the family adapts to transitions of place, time, and community.

Mankin discusses the centrality of certain moral ideals, particularly empathy, that have resided at the core of Judaism through the ages.  Throughout this chronological inquiry, he argues over these points with leading thinkers, philosophers, and religious leaders, including Baruch Kurzweil, Yeshayahu Leibowitz, Jacob Glatstein, Maimonides, and others. In his view, these ideals always moved with the times, but not significantly: the core remained the same. However, a major change occurred in the era after Israeli-Zionist national identity was established in Israel: the wrongful interpretation of these ideals and their application in Israeli policy today.

The main source of this deviation is the historical evolution of the value of empathy towards the foreigner, the goy. According to Mankin, it started with the modern independence of the Jewish people and their return to a land from which they had been mostly absent from for two thousand years—a fact which possibly changed the very meaning of Judaism. Mankin argues this thesis using events from the Israeli-Palestinian conflict, such as the massacre in the village of Qibya, and by discussing Jewish sources and the writings of the above-mentioned intellectuals regarding actions taken in times of war. According to Mankin, religious Zionists bear an additional responsibility for this change, through the wrongful interpretation of religious sources. As a result, Zionism came to justify an almost murderous aggression towards minorities, creating violent movements with aspirations of ethno-religious superiority. They also sanctified power and violence, shaped the image of the new Israeli (Sabra), and created a new religious Jew. Mankin ends his argument by asking us to listen to the perspective of the Druze, so as to give a voice to other minorities—and to their responses to this central development in Israeli society (minorities who, unlike Palestinian-Arabs, are not seen as implacable enemies). This discussion is not just meant to create a seemingly balanced description of the problem; it is also presents the perspective of a group of people who are able to empathize with both the Palestinian and the Jewish-Zionist narratives. In the context of understanding the clash over rights between Israelis and Palestinians, Mankin seems to be offering the Druze perspective as a compromise.

Mankin’s claim, that it is the Jewish people’s failure to create a political theology that led to the ethical problems he presents in the book, is in my view correct. He explains that without such a political theology, the people of Israel are left standing on the historical sidelines, exempt from following the same ethical code as other sovereign nations. But his solution—a non-sovereign existence that would nevertheless preserve the Jewish presence in Israel, but without acting like other countries with regard to justice and wrongdoing—is less persuasive. This last limitation is a barrier that is difficult to get around, considering that it could be interpreted as “a form of essentialism.” Indeed, its justification relies on past assumptions, such as: “Jewish people should behave ethically because they are Jewish.” Mankin is aware of this problem, quoting Yeshayahu Leibowitz on this point. But in my estimation, his analysis is insufficient to tackle the issue. Why should Jewish people specifically need to behave, govern, or maintain sovereignty more ethically than the rest of the civilized world? If we consider again Mankin’s claims—that Judaism and the Jewish people are remnants of a historical artifact, that Jewish existence in Israel is a problem requiring a solution, and that the solution can only be an anomaly—then Mankin’s analysis unwittingly reflects the religious Christian argument of the obsolescence of the Jewish people and Judaism. A claim that has strong hints of antisemitism.

The other focal point of the book, Mankin’s argument about the “irrational connection” between Judaism and power, is also hard to accept. Is every use of power bad? Is it never necessary for a country to wield it? Is there always an alternative to the use of force? Mankin does not elaborate on this, nor does he explore it across Israeli society. Indeed, in relation to this point, it would have been better if he had mentioned other examples of the excessive use of force in Israel: the suppression of the riots at Wadi Salib, for example, or the Israeli Security Agency monitoring Mizrahim, or the Altalena affair, or even the violent protests of the Ethiopian community. Instead, he fixates solely on “the Palestinian issue” when discussing the ethical repercussions of force and its use within a country. The result is too simplistic, and fails to consider political alternatives that Israel could implement other than “ending the occupation.”

Mankin’s text also presents a dialogue with his “Druze friends,” but it too lacks analytical depth. It does not offer any considered discussion of his friend’s opinions, their hidden implications, or indeed any conclusions. The section also exhibits one of the book’s greatest flaws: presenting intricate philosophical arguments about Israel’s failings without suggesting an applicable alternative, whether ideological or practical. Moreover, the dialogue is especially significant because it does not align with the flow of arguments that the writer presents.

It is possible to err and think that the Druze approach is Mankin’s solution to the war of narratives between Israeli-Jews and Palestinians. But it soon becomes apparent that it is in fact an exploration of native rights. At the beginning of the passage, he describes his embarrassment with Israel’s sovereignty, tying this to his grandfather’s experience upon immigrating from Europe; he felt “excited about the Jewish rule because ‘everything is ours,’” while also acknowledging the native rights of the Arab as preceding his own. Mankin’s grandfather lends credence to the approach that the Arab and the Druze had belonged to the Middle East for hundreds of years, while he, a Jewish European immigrant, lacked this belonging. Unlike the Jewish communities in the Ottoman Empire, who did have a local ethnic identity, Mankin and his grandfather arrived bearing an ancestral right that relied on a tradition of memory, of remembering past belonging. This right establishes the continuity, whether actual or imagined, between them and the land. They feel, however, that this continuity is inferior to that of the Arab or Druze, because it is disrupted. This experience makes them the new immigrants, and the last link in the chain of immigrations and constant movement of population that has always featured in the area.

Yet, if Mankin’s goal is to discuss the superiority of unbroken habitation as the basis for native rights, his choice of natives and location is strange. At the beginning of Chapter Six, “Listening,” Mankin asks the reader to listen to a narrative that presents the ultimate enemy, “the Arab”; yet for this role he chooses Samer the Druze, who identifies as a secular Palestinian. The writer is aware that Samer’s identity is that of a small minority within the Druze community, but still chooses him as the Druze’s spokesperson. Thus, this chapter is detached from the book’s central theme regarding the Palestinians, despite the writer’s wish to emphasize the act of listening to others. Furthermore, Samer is a Druze from Peki’in village—somewhat ironically — representative of continuous “Jewish indigeneity” in the area. Christian settlers arrived there, to live alongside the Jewish residents of Peki’in, after the destruction of the Second Temple; following the Islamic Conquest, Muslim, and eventually Druze settlers arrived as well. Thus, and paradoxically with regard to Mankin’s argument about the Jews’ broken ties to the land, many claim that Peki’in’s chronology is the strongest symbol of continuous Jewish settlement since the diasporic era after the First and Second Temples and up until the foundation of the State of Israel in 1948. (Others dispute this claim.)

The choice of Peki’in also offers unexplored complications for a meditation on Israeli power. Peki’in’s story, which includes layers of settlement, contradicts the notion of the area as a place of coexistence. Samer hints at this several times during his discussion with Mankin. Because of this, Mankin could have used this topic as the focal point for his discussions about sovereignty, use of power, violence, and the shift in the status of native groups of the region from minority to ruler and vice versa. He could have examined different approaches for applying sovereignty, using force, and deploying national survival strategies across history. The Jews of Peki’in, who lacked men and arms during the Arab Rebellion of 1936, fled the town in fear of the Arabs’ violence, which had harmed other Jewish villages. The Druze inhabitants of Peki’in were divided—some helped and hid Jews, while others sided with the Arabs. At the end of the War of Independence, Peki’in became part of the State of Israel, but the Jewish community of the village never fully recovered. Out of the historical complications and the constant switch of roles from minority to sovereign among the “native” populations, one can examine the history and the use of violence against local groups. Such an examination may have perhaps even led to deeper insights and solutions about the moral difficulties raised by the author regarding Israeli sovereignty and the goy. As Samer explains to him: “Because what is your problem? Your problem is that you never thought about what it is like to integrate here.” But Mankin does not offer us these analyses.

In conclusion, the book’s discussion of the complicated conflicts did not reach its full potential. In the end, the book is a personal essay that mostly reflects the writer’s sense of vagueness and lack of coherence when he is required to justify his place in the local discourse between natives—if he has such a place in the conversation at all. But, more than anything, I feel that as he writes, Mankin is searching for a sense of belonging to a lost community that he yearns for.

Translated from the Hebrew by Shira Melcer.

A deep dive into how Israel has fought COVID-19, how it has fought it differently from other countries, and what the results of its struggle have been.