This article was originally published in Hebrew in Panas and translated to English by Shira Melcer. 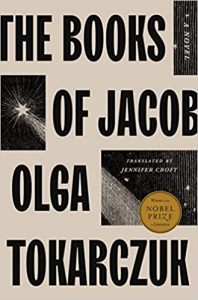 Olga Tokarczuk’s first significant mention in the Israeli media was on the right-wing website Mida.  In November of 2015, even before she won the Nobel Prize for Literature, an article was published there celebrating her being awarded Poland’s prestigious Nike Award for her historical novel The Books of Jacob, which is about the messianic Jewish leader Jacob Frank. The writer of the article is Miri Paz, an acclaimed translator, who is also responsible for the excellent translation of a collection of Bruno Schulz’s stories, published in 2018 by Hakibbutz Hameuhad publishing house. The title of the article is “Olga Tokarczuk, the Polish Writer Who Refuses to Succumb to Antisemitism” with the subtitle: “A new novel led to beloved, award-winning Polish Writer, Olga Tokarczuk, receiving death threats, perhaps for loving Jews too much.” According to this headline, most of what Tokarczuk does is love Jews and oppose Polish antisemitism. Reading the article, it becomes clear that Tokarczuk’s work is derived from contemporary political views associated with leftist ideology, such as supporting an inclusive immigration policy, fighting against closing Poland’s borders to immigrants, and her interest in contesting the existing political boundaries in general. The article is balanced and informative, educated and interesting, but my main interest here is not in the content, but the way it is framed by the headline – which I think is safe to assume was not written by Paz – and the context created by its appearance on Mida: Tokarczuk won the attention of Israeli readers as a supporter of Jews and by default also of Israel.

This also continued in October 2019, when the winners of the Nobel Prize for Literature for both 2018 and 2019 were announced. The traditional announcement in the Israeli press marks one of the only times in the year when literary news infiltrates “regular” news, forcing editors to introduce the writer, in this case the new European cultural hero who hadn’t yet been translated into Hebrew, to the average Israeli reader. The coverage in the Israeli media repeated the same descriptions of Tokarczuk as the Mida headline, as someone who fights Polish antisemitism, Tokarczuk telling the story of the Jew Jacob Frank, Tokarczuk who supports the Israeli narrative.

In the Mida article, Paz mentioned that The Books of Jacob was in the process of being translated, and indeed, several years later, right after the Nobel Prize win and just before its publication in English, the novel was published in Hebrew, translated by Miriam Borenstein and meticulously edited by Avriel Bar Levav and Jonatan Meir. This publication marks the second phase of the process of Tokarczuk’s reception in Israel, and this time there was an actual novel at the center of the process. Indeed, it is not surprising that The Books of Jacob generated significant interest in Israel. It is an ambitious historical novel revolving around the character of Jacob Frank, the successor of Shabbetai Zvi, with Jewish characters at its center. The novel sold thousands of copies in Israel and quickly received a second printing, including some corrections and changes. The context through which Tokarczuk discussed Frank is inclusive, shedding a light on characters that are less frequently explored. Frank was viewed as a marginal Polish character, redefining the meaning of Polishness. Within the lively Polish discourse Tokarczuk is part of, one can see The Books of Jacob as a response to the criticism she has received for her lack of national pride. It is as if she is saying: “You wanted Polish pride, this is Polish pride for me, an identity of minorities, hybrid, marginal, eccentric, crossing beyond cultures and boundaries.” However, it is in Israel, the country of one of the minorities under discussion, that the novel was read from a different perspective. Most reviews of The Books of Jacob highlighted the centrality of the Jewish perspective in the novel, the importance of telling a Jewish character’s story and how Frank contributed to the development of Kabbalistic thought. The novel was presented as one that celebrates Jewish national identity.

In an afterword he wrote for The Books of Jacob, Jonatan Meir put together an impressive list of the Hebrew literary references to Frank and academic discussions about him. He argues that both the world of Hebrew literature and the world of academic Jewish studies described Frank as a heretical, fraudulent, despicable, satanic, and nihilistic person. Only now has new research, especially that of Pawel Maciejko, begun to restore Frank’s reputation and correct the historical context. Frank is no longer referred to as part of what seems to be “a series of Sabbatean heresies.” Instead of ‘false messiah,’ Maciejko describes Frank as an anarchist savior, whose unique syncretistic vision was misunderstood and interrupted by rabbis and priests. Tokarczuk’s work, Meir claims, marks the continuation of this process: “This is the first novel written according to new research.” She is not limited to the point of view of the Jewish opponents of Sabbateanism. “Her perspective stems from Polish history, in an effort to show the bustling multi-cultural life that disappeared, the novel is written for today’s Polish readers.” However, most Israeli reviews dismissed this context, and did not discuss the political implications arising from it. It seems that the only narratives that were available to the Israeli reader are those that were described by Meir. The first, the “traditional” narrative, views Frank as a crook and a criminal, a narrative established by the 18th-century opponent of Sabbateanism, Rabbi Jacob Emden. The second narrative views Frank as a vital, rebellious, syncretistic awakening, associated with the rejection of rabbinic authority and tradition, the first sparks of secular Judaism as a legitimate Jewish identity. In this vein, Frank’s story is seen as legitimizing the existence of secular Israeli identity. These two Israeli narratives of Frankism are national perspectives: the “rabbinic” national agenda opposing Frankism, and the “new” national agenda that sees Frank as the pioneer of antinomian national life. Either way, from as Israeli perspective, Tokarczuk’s Frank serves as a building block in the growth of the Israeli nation, as part of a national, Jewish narrative. 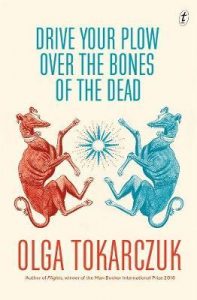 The protagonist of Drive your plow over the bones of the dead is Janina Duszejko, an eccentric old woman who used to be a bridge engineer and then a teacher. She studies astrology as a hobby, she is a vegetarian who loves animals, and she fights against certain groups of men. Traditional men, hunters, Catholics, the exemplars of Poland’s national right-wing. One day, one of the hunters dies in unnatural circumstances, and it seems that the hunted animals are the ones who took vengeance on him for hunting them. The protagonist creates an astrological chart for the deceased, revealing that it was necessary for him to die, and she does the same for every dead body who is found. All evidence points to the animals, and she tries to show her findings to the police but is ignored. It is then discovered – and here I am venturing into the morally dubious terrain of spoilers – that Janina is a radical ecological terrorist who acts against humans as a defender of animals. Human beings and animals change roles throughout the novel. People dress as animals, animals signify people, animals behave like people and vice versa, and people murder for animals’ sake. The ordeal is not brought to an end by law enforcement agencies, but by escaping into the liminal twilight zone between countries, between law enforcement authorities, between nationalities, and of course between animalistic and human worlds. Tokarczuk’s post-humanistic point of view challenges classic humanism, proposing that the human being receives a new role, to be in harmony with nature, and to actively resist being separated from it. A role in which the nature of humanity is expressed by blurring the lines of identity and not by sharpening them.

Despite the book being an accessible spy novel, much easier and fun to read than the heavy, academic, historical The Books of Jacob, it was received in Israel with markedly less enthusiasm. I suggest that the reason for this is the gap between Tokarczuk’s image created by The Books of Jacob and the “new” image – from an Israeli perspective – presented in Drive your plow over the bones of the dead. This causes Drive your plow over the bones of the dead to shed a new political light on The Books of Jacob, and also on the decision of the Nobel Prize committee. Apparently, Tokarczuk does not belong in right-wing journals reporting antisemitism and anti-Israel news, and her unambiguous stance against European antisemitism should not be seen as a source of Israeli pride for being a Polish writer standing against antisemitism in Europe. Tokarczuk, as a writer and philosopher of the global left, sees this radical Jew, Jacob Frank, as an exemplar of the undermining of national identity. Her fight against antisemitism needs to be understood in this context.

The rapid character change of Tokarczuk’s image in the Israeli media, from an Israel-loving Polish woman fighting antisemitism and honoring Jewish history to a leftist, anti-nationalist environmentalist, was a process of Israeli disillusionment, and an understanding of the place of Judaism and the fight against antisemitism on the international scene. This political awakening enables an acknowledgement of the lacuna that allowed Tokarczuk to be placed in a right-wing context. This context is part of the Israeli effort to preserve the state’s image as the sole representative of Jews, and its attempt to enlist every opponent of antisemitism as a supporter of the country. However, Tokarczuk, without banning her novels from being translated into Hebrew, without direct criticism of Israeli policy, and with an honest opposition to antisemitism, offers an alternative to the Israeli perspective, depicting Jewishness as a hybrid, non-national model of identity, which undermines particular identities and crosses cultural boundaries.

How cinematic depictions of the Mossad spy became a reflection of shifting attitudes towards the State of Israel.