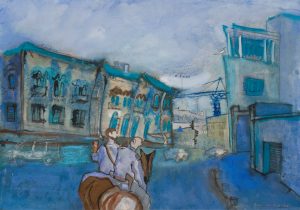 n the event, the April 2019 General Election was dominated by a single issue: whether Benjamin Netanyahu, in the face of multiple allegations of impropriety in public office, should be allowed to extend his decade-long reign over the Israeli political landscape (and, not incidentally, become the country’s longest-serving prime minister).

But the host of issues intertwined with the Israeli day-to-day didn’t go away. Security, the economy, majority-minority relations, synagogue versus the state. (As we go to press, the last is threatening to upset the ambition of the man described by Hirsh Goodman as “the Magician” in our inaugural issue.)

Here, we present commentary from three members of our Editorial Board on the likely implications of the last elections—observations which, if nothing goes according to Mr Netanyahu’s plans, may very well presage the much-sooner-than-expected re-run of April 2019.

The Tel Aviv Review of Books.

I have been an engaged homo politicus since I can remember myself, long before I came of suffrage age. The civic duty to be an informed citizen (via non-fake news delivered twice a day with the thud of a print newspaper dropped on the doorstep), then turning opinion into action at the ballot box, was absorbed like so much mother’s milk as the son of a social studies teacher in suburban New Jersey. My pre-adolescent fascination with politics only grew once I arrived in Israel 25 years ago. I discovered in my adopted country political engagement elevated to a type of verbal warfare unfamiliar in America (at least in the pre-Trump era). Everyone here is expected to have an opinion, to proclaim and defend his or her view, and to loudly engage anyone within earshot.

This short political biography explains why I have never understood “undecided voters”— how could one be undecided? That is, until this month’s election for the 21st Knesset. In my Religious Zionist town of Efrat (recently dubbed by Ha’aretz as “Occupied Scarsdale”) the entire pre-election Shabbat was filled with discussions of voters perplexed at being undecided just days before the election. And this in a politically engaged settlement with voter turnout over 10% above the national average! The reason may have something to do with the transformation or collapse, depending on one’s point of view, of the decades-long template of Religious Zionist politicals. I suspect that it had more to do with ambivalence about Netanyahu as the de facto recipient of support regardless of whichever center-right party one chooses.

In the end how is indecision ameliorated? For many years I ate at a lunch counter near my Jerusalem office run by a charming Moroccan grandmother named Phoebe. I remember asking her before the 2003 election who she favored in the race. “Listen, sweetie,” she said, “I always vote for Menachem Begin.” Fearing that Phoebe was beginning to lose a marble or two I reminded her that the now deceased Begin had retired from politics twenty years earlier. “I know, sweetie,” she replied. “Each time I enter the voting booth I look for his name – when I can’t find it I just grab any other slip. It doesn’t make a difference.”

In most other matters Phoebe was a very wise woman. But in this case I couldn’t ignore the dogged impulse ingrained by my mother that it does, in fact, make a difference. In the end I relied on William Safire’s “Clothespin Vote” method, from the idea of holding one’s nose in the polling station. But, as we Israelis now have the opportunity for a historic “do over,” in my heart I am still an undecided voter.

They say that the devil is in the details. In 2015, Israel’s legislature decided to raise the electoral threshold to 3.25%. True, this decision did not benefit any of the smaller parties, and applied equally to Arabs and Jews. But it’s precisely here that we find the devil of discrimination against Israel’s Arab population.

3.25% of all Jewish voters—84% of the general Israeli electorate—translates into a 4% general target for the party lists who draw their support from the Jewish “street.” However, for the party lists competing for the votes of Israel’s Arab citizens—16% of the general Israeli electorate—they must secure the support of a full 20% of the Arab electorate, in order to pass the 3.25% threshold. If a similar 20% electorate proportion were to be applied to the Jewish parties, only two—Blue & White and Likud—would succeed in exceeding the electoral threshold.

Rafael Eitan, a former Chief of General Staff, once expressed the wish for Israel’s Arab population to be like “drugged cockroaches in a bottle.” The same principle, drugged cockroaches in a bottle, is at work here, because Israel’s Arab population are being prevented from implementing the most important principle of democracy: pluralism. Whether of the political Left or Right, Religious or Secular, Nationalist or Liberal—all must unite in the suffocating bottle that is the electoral threshold.

The reluctance of many Arab voters to participate in the last elections is due, amongst other things, to the merger of the different streams of Arab political activity—some with opposing political perspectives. The result: the boycott of the elections by some of their actual supporters. Raising the electoral threshold is not only an anti-democratic measure, it is also a racist measure.

To Bibi or not to Bibi / Ofra Bengio

The 2019 Israeli elections illustrated four interrelated phenomena: The death of ideologies, the blurring of borders between right and left, the personification of the election campaigns, and the rising role of the new media.

The death of ideologies was marked by the fact that neither of the two big parties, Likud and Blue & White, attempted to appeal to their potential voters with clear-cut ideological messages; rather they opted to evade these issues. Furthermore, those parties which portrayed themselves as being ideological, such as the Labor Party, Meretz and Kulanu, lost ground in the elections.

The blurring of borders between Right and Left was most notable in the new party Blue & White. Eager to portray itself as a centrist party, it vacillated between the political poles especially as it was haphazardly established by a conglomerate of various personalities and parties carrying various messages from the extreme right to the extreme left. Nonetheless, its attempt to appeal to rightist Likud voters was shunned by the latter who accused it of being leftist.

The personification of the campaign boiled down to the question of “to Bibi or not to Bibi.” His own camp portrayed him as a political genius, who after four terms turned the country into one of the most successful countries in the world. The other camp, for its part, dwelled on very negative assets such as corruption, nepotism, the collapse of health system and the deterioration of deterrence vis-à-vis Hamas. On the whole, most of the parties concentrated their campaign around the leader rather than the party itself.

Finally, in comparison to earlier elections, this time social media played an important role, exploited as it was by the different parties and leaders to send quick, short and palatable messages for mobilizing the public—for themselves or against the others.

Read more from this issue

Get our latest updates directly to your inbox