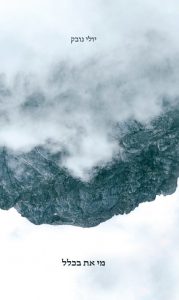 knows how to weave literary threads. Her new memoir is woven from at least three of them: reflections and insights from her time as Breaking the Silence director, her journeys to the ends of the earth to explore the depths of her mind and soul, and her love for her family, friends, and colleagues. Each of these parts pulls in a different direction, with all of them together becoming a powerful, convincing and unbreakable fiber, despite her repeated claims of going through a ”general collapse.” The book is an arrow aimed at three sets of readers: her supporters, her opponents, and herself. Her opponents, in particular, should be able to extract several insights from it. Insights about their malice and their cruelty, and about the destruction done to Israeli society’s capacity to communicate.

Breaking the Silence is an organization of former IDF soldiers who for years have been gathering testimonies from soldiers serving in the Occupied Territories. Their (official) goal is to increase awareness of the daily reality there and to encourage public discourse about the moral price of militarily controlling a civilian population. This is done with the goal of ending the occupation. Personally, I really admire their activities and am a supporter of the organization. Until reading Who Do You Think You Are?, though, I didn’t fully understand the price that these heroes are paying. In her uncompromising search for private meaning, Novak helped me to understand the public significance of Breaking the Silence.

The biographical answer to the title’s question Who Do You Think You Are? is simple. Yuli Novak was born in 1982. She was an officer in the army, a lawyer by training, and director of Breaking the Silence from 2012 to 2017, the years of the war of attrition declared by the right and the inciter-in-chief Netanyahu against the left in general and Breaking the Silence in particular. The book is devoted to deeper and substantial answers to the same question. Already on the first page the existential tension between the private and public woman is defined: “Try and remember – you’re not that thing, that they are comfortable being. You never were.” Yuli Novak seems to be someone who is ready for situations that she was never prepared for. The female director of an organization made up of former male combat soldiers, patriotic in theory but in practice an opponent of the regime, a white tourist among South African blacks, a liberal among racist Afrikaners, a lesbian in a still conservative Israeli society. It’s no surprise, then, that “anger and compassion live within me. Inseparable, intertwined with one another.”

This is the funeral march of liberal Zionism. Yuli Novak naturally found her place in an organization deeply planted in the heart of the left-wing Zionist consensus. “The idea of Breaking the Silence precisely matched the Zionist political narrative that I knew and believed in…this occupation and only this, this is the thing that needs to stop…Just like “my” straightness, which I didn’t doubt until I didn’t have a choice, I also never seriously considered doubting “my” Zionism. It was also simply a given reality, one I learned to love, to explain and even to defend when necessary.” From reading the book, one can’t escape the conclusion that it’s possible to be a real leftist in Israel only if you live in constant denial of the reality. In her role, nobody gave Yuli Novak this pleasure. “It never occurred to me to ask the most basic, personal and non-theoretical question: what am I without Zionism? What will remain of me if I give up on this element of myself? What am I without it?” The answer is the essence of the entire book – “I got lost inside myself. Inside the person I was.”

There is something strange about the memoirs of someone who is only 40. It’s true, Alexander the Great died when he was 33 (back then not many people reached that age) and he didn’t leave behind any writings. But according to today’s life expectancy Novak is not even halfway through her life. So what’s with the memoir? And that’s exactly the point. In an era where every person will change jobs at least five times throughout their lives, it’s valuable to summarize each chapter separately, exactly like Novak has done. 40 years old and exhausted, like she has already passed through the hardships of an entire life.

Novak, according to her testimony, was captured in the snare of the impossible Israeli reality. “Your home, the place where people feel at ease in the presence of bombs and the killing of other people? The place where the number of bodies from the other side of the fence are a source of pride, and not of weakness. This place, where you no longer speak one another’s language, is the only home that you have…A system that once we were an integral part of and today – it seems – it’s trying with all its might to push us out.” And the result: “What will be left of me if I give up on this story that I was? What am I without it?”

During the organization’s difficult years, she stood at its center, “fighting for the end of the occupation [and for] our right to criticize the occupation” when “the testimonies were the tool through which we tried to bring it about.” During these years, right-wing organizations, encouraged by Netanyahu, made every effort to push anything left-wing out of the boundaries of the Israeli consensus. To turn them into traitors in the Israeli consciousness. At Breaking the Silence, on the other hand, “we always made sure that the organization’s criticism of Israeli rule would only focus on the occupied territories on the other side of the Green Line…in a way that doesn’t threaten the justice of the Zionist enterprise within the 1948 borders.”

This is where the personal thread makes its entrance. While the organization is desperately struggling to stay within the (narrowing, it must be said) bounds of Zionist discourse, she begins to understand its incompatibility: “as long as the fracture deepens, as long as the pain that accompanies it sharpens, it becomes clear to me that what created this fracture will only be found in the depths, in the places that until today I was prevented from touching, that I didn’t even know were possible.” This book, therefore, is a journey beyond the mountains of Israeli ideologies, the real and the superficial. It’s a journey to Novak’s most intimate sites of identity, via travels around the world, and the sorrows of others: “Maybe this is the reason why I needed to find a place for myself on an ancient volcano in the heart of the ocean, in order to begin to understand what led to this outbreak and the implications that it had – for me and for everyone.” Or her insight about South Africa: “This place never stops surprising and confronting me with my starting assumptions about people and politics and clarifying for me things that I couldn’t explain to myself there, at home.” Powerful natural phenomena, unique people and exotic places are the road signs that Novak travels between on her journey from trauma to recovery and renewal.

Novak’s writing is stirring and charismatic. As an aside, though, I should note that her frequent use of low language doesn’t make her message more catchy or popular. It’s possible to do without “after all this shit began,” “oh my god what a mess,” or “scratched from the ass.” It’s not pleasant and it’s not convincing and it jars the book’s harmony.

Aside from this, though, her thread is very tight and exact. There is hardly a single rebellious hair. Novak is nearly compulsive in her desire to control every ripple of the text’s waves. She dismantles the conventions of the Zionist left, but intentionally doesn’t present a full alternative. She leaves the work to the readers, because she “already knows: what left me alone was exactly that – the race for the truth that is yours, not mine. What left me alone was over-identification with that which isn’t me, and which never was.”

Following the threatening attacks, and the escapes, the personal meetings and the internal examinations, she broke her bonds of denial and broke her own silence: “The written word is the most useful and sophisticated way that I found to cover the great silence.” The sites revealed to her by others were completely different from anything she knew as an Israeli. “I want to believe that I am ready to see something that I didn’t dare to see before.” This “something” is Israel beyond the cliches. With relation to her South African experiences, it’s difficult not to read Novak’s book as an Israeli version of Alan Paton’s famous and profound Cry, the Beloved Country. A mute and silent cry. Thanks to Yuli Novak and her friends – the soldiers – witnesses are no longer silent. The only shame is on the Israelis who still don’t want to listen to the testimonies being cried out from the roofs of Hebron, the alleyways of Gaza, and the nooks of the casbah. It’s a shame that Israeli society is still deaf.

It’s difficult to lay the book down, and equally, it isn’t easy to see Israel through the eyes of the author. I read the book twice, once as a regular reader and once as a reviewer. At the end of the readings, I concluded that both Novak’s critics and supporters haven’t completely understood the importance of this book. The testimonies of the individual soldiers who are breaking their silence, as well as the organization as a whole, aren’t necessarily part of the Israeli left. They are something different, much more comprehensive and aspirational. They took on themselves a heavy and meaningful mission: to make Israel rise above the (too?) high standards that Israel sets for itself. If the IDF is the ‘most moral army in the world,’ or aspires to be so, there is no way of reaching the peak of the moral Himalayas without revealing the truth. To dismantle the mines spread out along the way by the lips of arguing politicians, the immoral orders and the over-enthusiastic implementation of brainwashed soldiers. In an ideal world an organization like this would be supported by the state itself, and people would have to come from all walks of life, right and left together, to give testimony. Because who fundamentally doesn’t want a more civilized country? Right-wing instigators and the cowards of the left apparently don’t. Novak does though, and is trying to change things.

This review was translated from the Hebrew by Alex Stein.