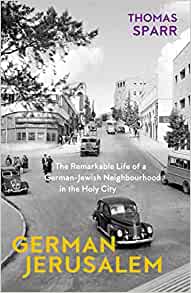 Thomas Sparr, editor-at-large of the German publishers Suhrkamp, and a former resident of Jerusalem himself, has written an elegant, elegiac book about German Jerusalem. The shorthand phrase “German Jerusalem” brings to mind two possible historical references. Usually, it is used to describe the picturesque heavy-stone building of Jerusalem’s German colony, one of eight colonies constructed during the last third of the nineteenth century by followers of the Millenarian theologian Gottlob Christoph Jonathan Hoffmann (1815–1885), known as the German Templers (Tempelgesellschaft). The story of this German colony, described recently by historians Matthew Fitzpatrick and Felicity Jensz as “a religious El Dorado based on illusory, chiliastic expectations,” started during the late Ottoman period, at the intersection of Pan-Germanism, colonialism, Christian eschatology, and late Ottoman efforts of reform and modernization. The story of that German Jerusalem ended abruptly. Due to the sympathies expressed by increasing numbers of the Templar community members towards the Nazi party, and with the British authorities fretting over a fifth column following the outbreak of World War II, some of these colonies were diverted into concentration camps for the alien Germans. Ultimately, they were deported en masse, mainly to Australia.

Alternatively, the same phrase has been applied, figuratively, to the nearby Jewish neighborhood of Rehavia: a garden suburb established a few decades later, in the early 1920s, by the Zionist movement. Ascribing “Germanness” to Rehavia alludes to the fact it was designed by the German-Jewish architect Richard Kauffmann (1887–1958), but in particular provides a reminder that after the rise of National Socialism, the neighborhood became a hub of German-speaking Jewish immigrants, among them numerous academics, who had found refuge in Palestine. This story lies at the intersection of Jewish nationalism, British colonialism, urban history, and the “exile of reason” from Central Europe, a melancholic story about a forced flight with a tragic beginning but no clear endpoint. This is the subject of Sparr’s book.

Sparr is a genuine bibliophile, and his book is aimed at like-minded book lovers. If previous books about Rehavia were composed by historians of architecture or geographers, for Sparr, what makes the neighborhood the “capital of the Yekkes“—codename (with disputed pre-Zionist origins, according to Israeli-German historian Anat Feinberg) for German Jews—is the fact that one could find in the walls of its apartments personal libraries consisting of the disheveled tomes of classical Central European literature and humanism. Next, taking Rehavia to be the abode of the exiled intelligentsia, Sparr uses the book as an opportunity to spotlight the works and life stories of numerous writers, poets, and acclaimed academics of a bygone era. The book is a treasure trove of anecdotes, vignettes, and even gossip; like good wine, all taste better with age. A third, albeit thinner layer is provided by modern Hebrew literature, which also describes the neighborhood’s unique atmosphere and residents. Stitched together, these three layers compose an engrossing quilt.

Sparr is a respectful, sometimes deferential storyteller, always committed to guarding the dignity of his subjects. When mentioning in passing how Elsa (“Escha”) Burchhardt, Gershom Scholem’s first wife, divorced him to marry S. H. Bergmann, Scholem’s close colleague, friend, and next-door neighbor (119-20), Sparr avoids passing insolent remarks that might suggest character flaws in the then highly-respected and today iconic intellectuals. One wonders: under the layers of respectability, wouldn’t have this been an occasion for tittle-tattle between their neighbors in Rehavia and the tiny university community? When citing from Nathan Alterman’s oft-quoted 1936 satirical poem about Rehavia—which describes a neighborhood overpopulated by PhDs, where “doctor dwells opposite to doctor,” its small businesses carrying alien names such as Café Vienna—Sparr excises from the original text any hint of humor or sarcasm (43-4). The same applies to passages quoted from later works by Israeli authors, such as S.Y. Agnon’s posthumous Shira (1971) (the first Hebrew campus novel) and Amos Oz’s magisterial Tale of Love and Darkness (2002), even though much of the charm in both books had to do with the way they fondly teased the scholarly solemnity and Prussian seriousness of the neighborhood. Indeed, what discerns Sparr’s project from Israeli folkloristic and nostalgic books like Milon Ben Yehudah Straße/ Das Lexikon des Jeckes (2012), a popular compendium of Yekke idioms, jokes and “Sabra Deutsch,” is its outright lack of humor.

Sparr takes more liberties in imagining meetings and extended German conversations that never took place, between figures such as the poet Else Lasker-Schüler, Hannah Arendt, and Martin Buber. Furthermore, many of the authors who roam the pages of his book never actually roamed the streets of Rehavia: not Leah Goldberg, a proud Tel Avivian, who wrote a much-loved children’s book about the house on Arnon Street in the city that she chose to call home; nor Martin Buber, who rented an elegant apartment in the nearby neighborhood of Talbiyah. More than an imprecision, resettling Buber in Rehavia raises the question whether this is Sparr’s elegant way of dodging the claim made by Edward Said, the celebrated Palestinian intellectual and post-colonial critic, that members of his family had lived in the very same house until their forced eviction in 1948. Given that luminaries such as Walter Benjamin and Paul Celan never immigrated to Jerusalem—Celan, a Holocaust survivor, immigrated to France, where he lived until his death in 1970; Benjamin, who declined an invitation to join the Hebrew University’s faculty, famously took his own life at Portbou, on the French–Spanish border, in 1940—Sparr invites his readers to engage in counterfactual speculation and imagine with him: what would have happened if either had immigrated to Mandatory Palestine? An overtly pedantic historian might also object to his tendency to blur the differences between German-speaking Jews from Vienna (Eugen Hoeflich, Martin Buber), Prague (Hugo Bergmann, Robert and Felix Weltsch, Hans Kohn) and the “proper” Yekkes of Berlin, even though this approach is typical of the elegiac pathos for Mittleuropa as symphonies pathétiques. It is also aligned, to a degree, with the spirit guiding the founders of the Leo Baeck Institute (established 1955), who not only relied on the very nebulous category of Deutschen Judentums but also tried to navigate, as Christhard Hoffman and Guy Miron have shown, between their adherence to scientific principles and desire to erect a memorial for the perished – both the people and the culture. Not less problematic is Sparr’s tendency to assimilate any Jew who may have studied in a German university into German Jewry. This could be pardoned in the case of Arthur Ruppin (born in Rawicz, in today’s Poland), who did imbibe from German sociology, but seems less convincing in the case of the poet Leah Goldberg, who came from a Russian-speaking Lithuanian milieu, and translated Tolstoy’s War and Peace and the best of Russian poetry into Hebrew. Sparr certainly stretches the conceit too far in the case of Amos Oz’s mother, Fania née Mussman, born and raised in Równe (in today’s Ukraine), a stronghold of the Hassidic followers of the Maggid of Mezeritch. She studied for a short while in Prague, before marrying into the Klausner family from Vilnius, its men ardent defenders of late-Russian Haskalah values. In Sparr’s elegiac tale, too many become German Jews by proxy.

Almost entirely erased from the highly aesthetic narrative are echoes of the British mandatory conditions that were the backdrop of this historical drama. Arthur Ruppin is quoted in the book as claiming that “the Zionists who came here saw in their peculiar dreams of the New Jerusalem the green meadows and woods of their European homelands” (63); but Sparr does not say that the quote itself is a paraphrase of one of the most recognized lines of English verse, William Blake’s preface to Milton. As if to ridicule the author, the cover photo chosen for the English edition, taken from the Matson Photograph Collection, shows Princess Mary Street (renamed Shlomtzion Hamalka by the Israelis)—a hub for the Palestinian bourgeoisie at the time, with its iconic Rex Cinema (owned by the Arab-Christian businessman Joseph Pascal Albina) next to Queen’s Hotel. Driving the implicit message home, the photo also captures a local business, signposted in English as the “Jerusalem Automobile Company,” and a British military truck crossing the intersection, carrying troops. A stubborn undercurrent, the cover image revolts against the book’s narrative efforts of erasure.

If utopia involves an element of self-irony, or at least acute awareness of the unrealizability of the condition that it strives to achieve, Sparr’s sentimental tour up and down Ramban Straße is deprived of any irony. Rather, it is a longing for a lost age and a harmonious organization of experience. What did Rehavia’s towering German-Jewish scholars think of their neighbors—the Palestinian Arabs, the ultra-Orthodox, the Polish and Eastern European Jews, the Revisionist Zionists, the native-born Jews often critical of the migrants’ haughty withdrawal from their surrounding environment? Even though many of Rehavia’s residents devoted much thought to these subjects, Sparr’s book turns Rehavia into a metaphor, a mysterious island of Germanness away from Germany. Besides disclosing the primary audience Sparr had in mind, the original title, Grunewald im Orient (an allusion to a leafy Berlin district), captures the author’s desire to see the Jewish neighborhood in western Jerusalem as a time-capsule of Die Welt von Gestern: a beacon of Central European liberal humanism, frozen in time. Hindsight sentimentality is a powerful casting mold. It takes a conglomeration of disparate itineraries and hopes, the diverse desires, thoughts, biographies, and visions, and imposes on them a solid coherence and formal structure. All indecisiveness and indeterminacy (Unbestimmtheit) are replaced with nomological and teleological certainties (Bestimmtheit). Sparr set out to enchant his readers, and does so with considerable success. But in doing so, he demonstrates historian and geographer David Lowenthal’s claims in his seminal essay The Past as a Theme Park, that popular history, particularly of pioneer societies, often ends up in fantasyland, constructing more imagined than actual landscapes, an affective history seen through either nostalgic or apocalyptic lenses. There is something desperately missing from this enchanting, melancholic treatise. It is not captured in the phrase “German Jerusalem” as much as in what the French philosopher Paul Ricœur called the “hermeneutics of suspicion”: the demand not to surrender oneself to the apparent, surface level of texts but to treat them as harboring deceptive, concealing and deeper meanings and implications. More than real-estate, this suspicion was, to a large degree, a central trait of the thought of some of these famous exiles and, perhaps, their most enduring legacy.

An excerpt from Haggai Ram's book about hashish in Mandatory Palestine and Israel.